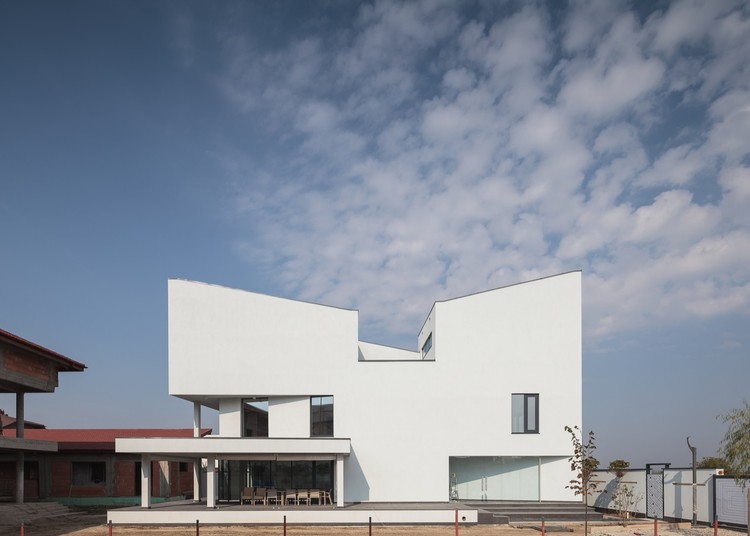 Text description provided by the architects. Among the highest concerns formulated at the beginning of the project for the house of Afumati, was that referring to its dimensions. It was at the end of the glorious period when square meters were flowing endlessly and the owners of the house were still under their spell, too. As almost everybody in those times, from a block flat you had to move into a house as large as possible, on a plot of land as large as possible. This particular plot of land is part of a newly developed urban area of the municipality of Afumati. Across the road there is still a houseless field.

The over-gauge resulting from the project theme also brought about the concern for the design of a monoblock object with a brutal appearance. Beyond the scale, we also wanted to get out of the recurrent logics of the new outskirts: that of a massive box merely placed inside a yard. This is why we thought from the very beginning about a carved out body, with gills that would let the house breath and with exterior spaces that could advance towards the interior. The owners wanted a tennis court by the house, on the Eastern side. The building itself reaches as far as the alignment limit on the Northern and Western sides in order to clear out the necessary space in the yard.

The gills and the carvings we have been referring to above, are developed only on this facade, the others (as-a-matter-offact, the most exposed to the wind) being much more opaque. The carvings in the volume create a diversity of intermediate places – open and covered terraces, loggias and patios – and, consequently, a more complex and less abrupt relation to the exterior. Another effect on the spatial structure of the house is the increase of the natural light effect: for example, the terrace carved out in the middle of the volume brings light to the attic level by means of a window located under the terrace bench and all the way to the entrance hallway, on the ground floor.

The attic – provided with this own terrace, with high parapet which also allows a certain degree of intimacy – is practically working as a separate house. At present, it houses a film projection room, a library with an open reading place and a rather generous space for parties. However, all these can be subtly and easily transformed into an apartment for the owners’ daughter, when given the case. The terrace on the first floor is protecting that of the living room. It was thought as an airplane wing, to be supported by four metallic circular section pillars.

Unfortunately, these were later covered and given a square shape, with a much stronger visual appearance. Also in addition to the initial project (and coming out of the beneficiaries’ fear of earthquakes) there appeared a pillar under the console that covers the terrace of the first floor. The evolution of the project during the building works led to another change. Initially, it had been established the wood panelling of the carvings, but, when we saw how those hollows were functioning in sunlight, we decided to keep to a unitarily treated object, whose main finishing was light.