Text description provided by the architects. The space requirement program requested by the developer (Townhall) included all the departments, public and restricted use, necessary for the proper operation of a facility of this nature. In the office we thought to incorporate a public space which could be used by the neighborhood as a multipurpose space that would allow us to provide greater flexibility to the building.

The inclusion of this multifunctional space in a building with so defined program, allowed us to bring the work of the police to citizen and converting the facility into a magnet for the local people on which, in some way, could begin to turn the social life of the neighborhood in which it is located, out in the suburbs.

The steep slope of the plot made us think about two layered volumes, parallel to the Avenida Joan Fuster and with a small displacement between them. In this way the upper body includes the entry from the avenue that is configured as a ramp, which with a slope opposite to that of the street, allows in the most natural way the entry into the building. This ramp is integrated inside the building being covered by a perforated aluminium lattice. Around the corner this body, previously understood as ground floor, becomes the first floor and with its cantilever marks the entrance to the multipurpose space. 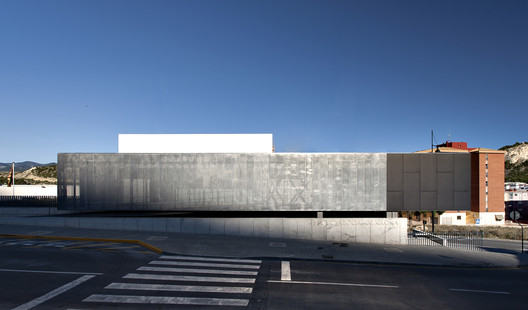