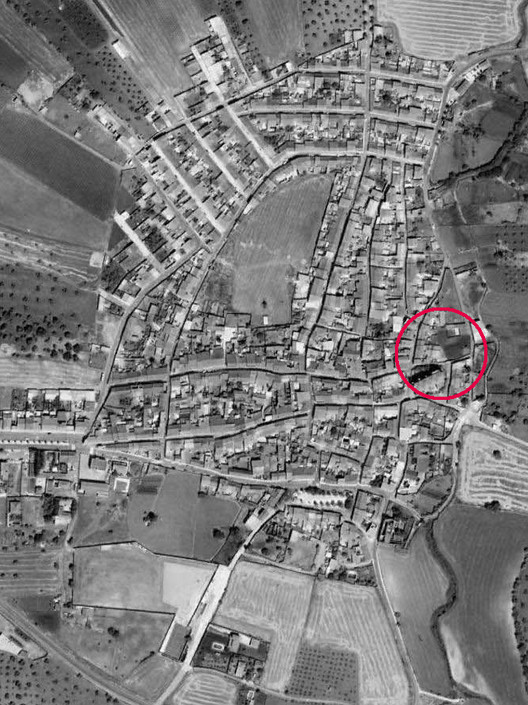 The place lies in the region of Llanos Olivenza to the west of the province of Badajoz and bordering Portugal. In the neighborhood where the church is located, at the eastern end of Miguel Sesmero Tower, the polygonal land has an area of 162.63 m2. It is located within a block mostly destined for industrial use.

Although the street is located just outside the town, it remains close to its center. It is narrow, 5m wide and with buildings of less than two stories high above ground. It also has two special features; the proximity of the parish church of Nuestra Señora de la Candelaria, a religious building built in the late sixteenth century with an imposing size that dominates the skyline of the city. Also, its edge condition where industrial buildings are located between the countryside and the city

The contemporary look of the city requires recognition of vectors that affect the urban reality. The city is like an open poem which is inherited and has no end.

The building joins the city and its surroundings in a particular way. Only the shared reality of such diversity of objects is what helps this difficult idea of common urban space.

In order to share and belong to a place is necessary to intervene materially the context in which is inserted. The approach seeks to link the memories to the closest reality.

The transfer of landscapes is the mechanism through which the projected object acquires properties ir characteristics of the environment. The boundary condition of the land is used for domestic adaptation of industrial buildings, which are located between the town and the countryside. By using a simple construction system and low-tech elements of a primitive architecture, we try to rediscover and reformulate an industrial one. The lattices of the facades allow lighting and ventilation of the space like it had a drying system.

The rest of the project relies on compositional strategies for solving the functional program. Each house has two floors. There is a very airy ground floor and staircase that leads to the upper floor. The bedrooms are located on the first floor. The physical characteristics of the space compress the sitting and resting areas and expand the day-use areas.

The deck offers continuity to the facade. By using faceted geometries, the deck adapts to the single and homogeneous volume of the piece. The building, which formerly approached an industrial context, now stands to join the urban environment and the hills and plains of the agricultural landscape.