Save
Apartment Blocks in Nanterre / X-TU 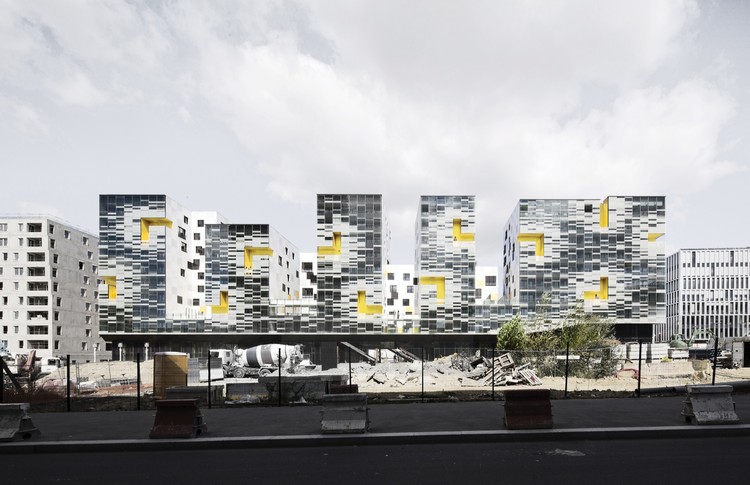 The inspiration to create this architectural landscape in its urban setting came from the original specifications for the project. Strong vertical fragmentation was another requirement, as was a broken skyline. As requested, the south facade features large six- to ten-metre openings, which are integrated by the vertical fragmentation. The volumes are split vertically by planted breaks. These clean-cut spaces structure the organisation of the ground plan and create a transparency between the terraces and the Promenade des Provinces Françaises.

Along the latter, the carved-up volumes are structured into two levels, one - lower - at the level of one of the local roads and the other - higher - at the level of Avenue des Terrasses. The lower section of the buildings forms a single cohesive structure, unifying the whole and providing a solid basis for the vertical landscape. The verticals are accentuated by the use of contrasting materials for the south facade and the inner surfaces of the breaks.

In fact the south facade has a continuous glazed outer layer that forms a glasshouse in winter and provides ventilation in summer. This glazing turns partially inwards towards the bottom of the facade, initiating the passage from one urban space to the other. The assembled volumes, with their vertical, horizontal and transverse planes, form a landscape that is fragmented to a greater or lesser degree but nevertheless cohesive in its diversity.

The whole seems hewn, sculpted out of one material. The urban silhouette is broken against the background of the sky: each volume is just as high as it needs to be. This is a system born of multiplicity and the recognition of individuality ...

Backgrounds can be seen through the breaks, illustrating the depth of the block, evoking the next street, telling of other dissected volumes that together create the new urban feel desired by the town planners: a many-faceted, human town that dreams of having a skyline like any major city.

The facades vary according to their orientation and situation. The double skin of the south facade optimises passive solar gain and the overhanging slabs serve the same purpose as awnings, protecting the interior from the sun. This glazed layer - composed of “nako”-type adjustable horizontal slats - unifies the volume of the building. The slatted windows give substance to the facade, like a taut veil drawn across the occupational diversity of these spaces. So everyone can express coherently a clear individuality whilst preserving the general harmony.

The double skin transforms the facade into a living space, increasing the usage value of the apartments. A glasshouse in winter, a ventilated space in summer, this will invite occupants to experiment with secondary crops at home as part of a personal environmental initiative. The future inhabitants of these apartments will be pioneers of the new way of living. Towards the bottom of the building, this double skin turns back to become one with the facade, forming a cantilevered volume extending towards the square and accentuating the horizontality of the levels.

Coloured openings animate this homogenous skin, a manifestation of its substance. Through their free and random arrangement, they symbolically express the diversity of individual lives and paths. Their depth and thickness vary depending on the facade, their usage value residing mainly in their suitability for sunny conditions. Their warm, dynamic hue responds to the red volumes of the neighbouring buildings. They are cheerful and create a strong identity for the building, asserting it as the habitat of the future for the new breed of town dweller. The west, east and north facades are clad in precast concrete lazured to give a clear pearly effect. They contrast subtly with the south facade. The load-bearing shear walls are of silvery concrete.

LOGGIAS, TERRACES, AND A NEW WAY OF LIVING

The new town dwellers of today aspire to the outdoors, the sun and the wind, to getting back in touch with the world of plants and helping in their own way to improve the environment. Loggia-glasshouses increase the surface area of the apartments, allowing them to benefit from free calories in winter and providing protection from the wind. They also provide an opportunity to experiment with genuine individual off-ground crops.

The loggias serve as internal / external areas of transition and as such, provide an opportunity to move around from room to room by different routes. They also help to mitigate noise and improve thermal management. Experiments carried out on urban roofs in Cuba serve as the inspiration for green terraces on the seventh floor, which will provide kitchen gardens for apartments with no south-facing facade or loggia. Colourful terraces offer sheltered outdoor areas in hollows in the facades. 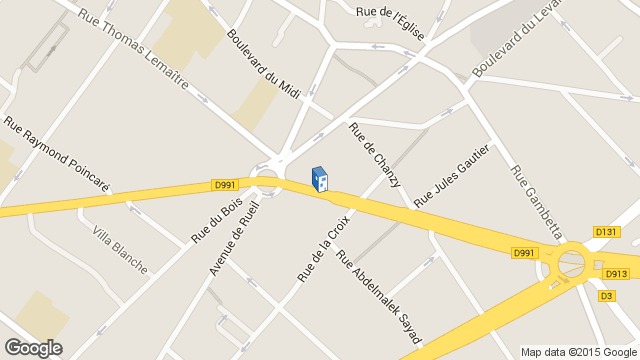 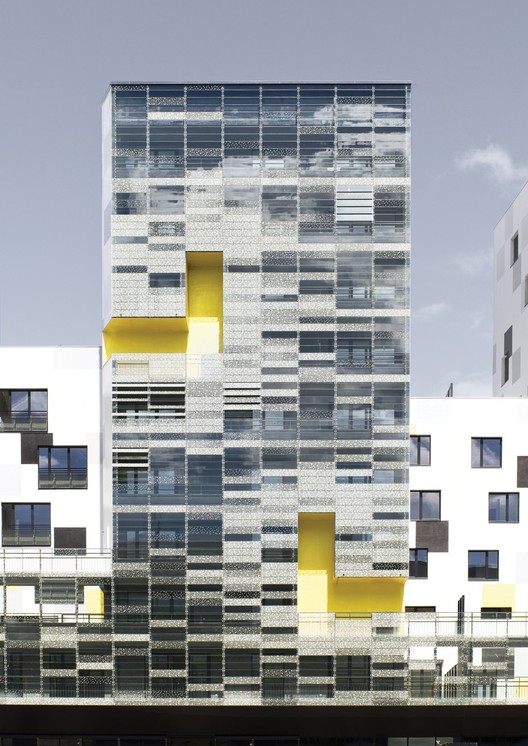