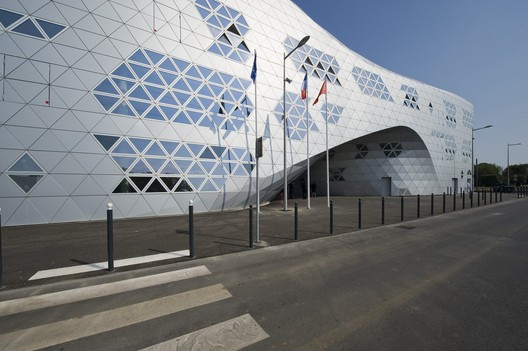 The new Georges-Freche School of Hotel Management in Montpellier, France designed by Massimiliano and Doriana Fuksas after winning a competition launched in 2007 was inaugurated this September. The building includes a hotel and three restaurants built on a 3.95 acres site in the ZAC Port Marianne area for the hotel-school Lycée Georges Frêche.

The project is developed horizontally, transforming the landscape and creating a new urban identity for the area.  The formal diversity, compact volumes and sculptural shapes blend into a single entity that also retains moments of spatial individuality throughout the interior.

The school accommodates two main building connected by footbridges, accommodation for students, housing for management, a gym and an athletic track and sports ground.  The entrance for the students and the professors is through an arch while the entrance for the clients is on an opposite side. The two buildings that form the edifice make up the sculptural mass around which the gym, the students’ residence and the management’s housing gravitate.

Massimiliano and Doriana Fuksas have designed the interior, the areas accessible to the public and the spaces devoted to the gastronomic sector and to the hotel. In the entrance hall leading to the gastronomic restaurant and to the hotel, there is a reception desk: a white lacquered sculptural object, mirroring the fluid forms and the solid character of the structure. The desk is covered with materials that are used for making boat hulls.

Different types of originally designed tables and chairs define the spaces dedicated to the interaction between the public and the students.  There is also the limited edition furniture specially made for the hotel. The School walls and those of the students’ residence are painted in a different colour on each floor, with the shades ranging from yellow to green to magenta and orange. The colours serve as signage to distinguish the different spaces and activities.

The project can be called “experimental” as much for its triangular shaped aluminium façade as for the use of reinforced concrete.  Both materials have been adapted in order to be able to adopt specific shapes  – curved and fluid – as required by the structure. The facades of the building have been constructed using 17,000 cases of anodized aluminum in triangular shapes. Each aluminum case is unique and bears its own specific bar code in order that it can be identified for its specific situation on the façade. The interaction between the facades reinforces the dynamic tension between the solid materials and the cavities, the light and the shadows, that are an inherent part of the projet.  The geometric design of the aluminum “skin” is developed further to apply to the 5,000 triangular glass frames that are mounted on metal nets.

The structure of the building is made from reinforced concrete. To reproduce the curves of the volumes, the project has used “shotcrete” technology.  Photovoltaic panels have been installed on the roof of the first building (multi-purpose room, exhibition gallery, administrative offices, classrooms, canteen) as well as on the roof of the apartments for the management.