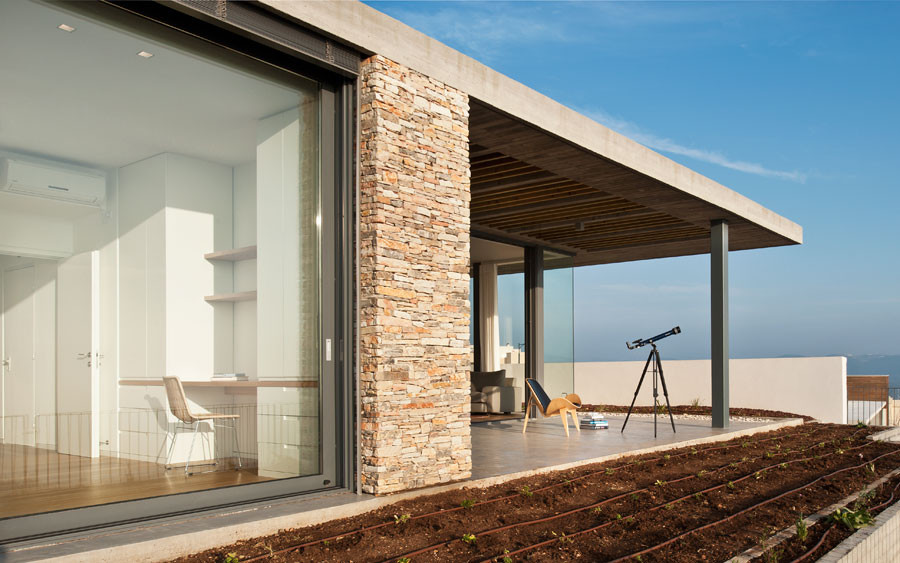 Text description provided by the architects. A mountain range in north Israel unfolds a breathtaking view of the northern coastline from Haifa to Rosh Hanikra.

The concept of the house on the mountain range relates to the landscape by ​​"framing devices" of two horizontal concrete planes that preserve as much as possible the preliminary panoramic view.

An exposed concrete shell folds leaving three open sides, two of them remain transparent and the one facing the street gets a local stone inlay.

The closure of the house to the north reflects its context - the house location near the northern border permeated and affected the northern concrete facade opacity.

A concrete envelope was chosen as a tribute to Brutalist concrete of the 50’s associated in our minds to the simplicity and truth seen in the adjacent kibbutz.

The landscaping was born out of a desire to create a path circulating the house. The entrance is facing the house, walking towards the landscape in between concrete slabs, out to the open landscape in the back garden and around the other side of the house along a slope which deepens and thus creates an intimate garden, despite its proximity to the street. Completion of the track leads back upstairs to the entrance level.