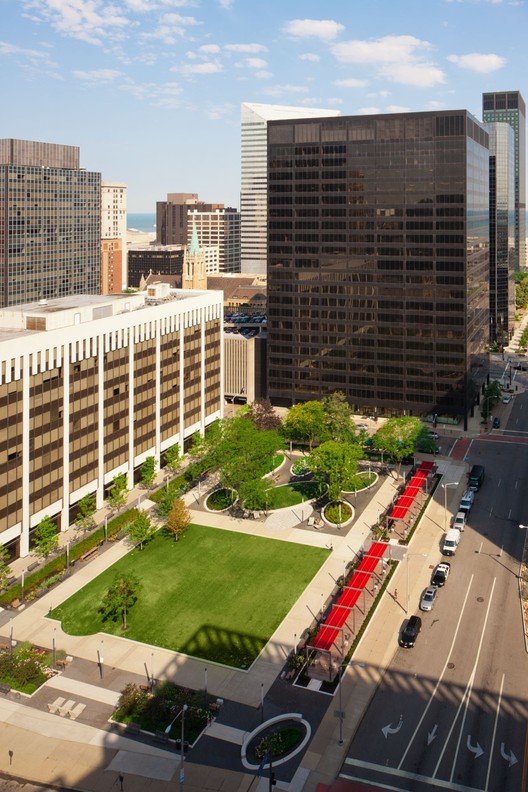 Thomas Balsley Associates, creators of some of America’s most acclaimed parks and public spaces, are putting the finishing touches on a new landmark project for the city of Cleveland, Ohio. Perk Park is a one-acre greenspace in the middle of downtown that transforms a long-neglected corner of modernist architect I.M. Pei’s historic 1960 master plan into a lively, welcoming urban environment for the 21st century.

Named for former Cleveland Mayor Ralph Perk, the park is located at East 12th Street and Chester Avenue, on one of several downtown parcels bulldozed decades ago as part of Pei’s urban renewal scheme. The first park on the site was completed in 1972: a New Brutalist ensemble of heavy concrete planters surrounding a sunken plaza, the old park quickly became a favorite haunt of vagrants and pigeons, an unloved and underused blight in the middle of the bustling central business district.

Balsley—working with the local office of Jim McKnight—was tasked first with giving the park back to its urban context, to open it up to the adjacent streets and make it feel a part of, rather than apart from, its immediate surounds. “You can’t let these sorts of public spaces cower from the street,” says Balsley. “That was the old way, and it didn’t work.”

The new park greets the street courtesy of what Balsley describes as a “forest and meadow” concept. Shade trees, as well as modified versions of the original planted mounds, are preserved from the old design; but now they’re complimented by a wide-open lawn sitting atop the former central sink, punctuated by a sculptural knoll perfect for daylight lounging.

Clear lines of sight replace the huddled bunkers. On the space’s north side, a secluded seating area is embedded in a grove of honey locusts, the trees casting their dappled shade on a forest floor of crushed stone. The oval mounds scattered throughout provide topographic relief, and their gentle curvilinear forms contrast with a geometric grid of 20-foot-tall light wands that echoes the rhythm of the nearby buildings while providing night-time drama.

The park is further activated by a program that includes food vendors and overlook terraces with café seating. Custom furniture by Balsley—chaise lounge chairs, high cafe tables with swivel stools, cafe lounge chairs—accord with the designer’s philosophy that public space should have the feel of an intimate “outdoor room.” Perimeter garden beds with still more seating help define the formal lawn, even as the large oval mound at its center softens its effect, providing a place for children to play and for adults to take in staged performances and the quotidian ballet of city life.