Close to the Port of Rotterdam docks, MVRDV has completed the Spijkenisse Book Mountain, a public library in Spijkenisse’s market square. It features a 480 meter route, lined with bookshelves, that wraps around a stacked, pyramidal form as it is showcased through the library’s glass structure. The “mountain of books” illuminates from within and serves as both an advertisement and an invitation to reading. The adjacent Library Quarter consisting of 42 social housing units, parking and public space is also a project by MVRDV. Together, with the Book Mountain, it strives to form an “exemplary eco-neighborhood”.

Continue after the break for the architects’ description. 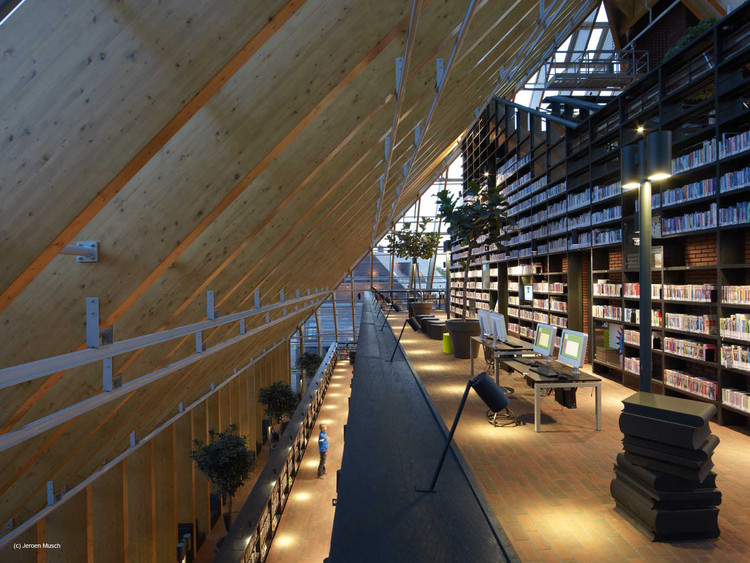 The library is designed as an advert for reading, its visible presence and invitation holding great significance for a community with 10 percent illiteracy. From underneath the glass dome the library is visible from all sides, especially from the adjacent market square where the library appears as one big book mountain. Underneath its monumental glass envelope damage to the books by sunlight is off-set by their normal 4 year life-span due to wear and tear from borrowing.

Located in the centre of Spijkenisse, the library with a total surface area of 9.300m2 sits on the market square next to the historical village church. Besides the library the building houses the environmental education centre, a chess club, auditorium, meeting rooms, commercial offices and retail. The exterior of the library refers in shape and materiality to the traditional Dutch Farm, a reminder of the towns agricultural past, which has grown from farming village to Ville Nouvelle in the past 40 years.

The library had to accommodate a number of other partly commercial functions. The stacking of this non-library program forms a pyramidal base on which platforms are projected, housing the libraries bookshelves and shaping a powerful symbol. The book platforms are connected via wide stairs and together form a continuous route of 480 meters around the mountain to its peak where a café offers panoramic views over this Dutch Newtown.

In order to connect the former village centre visually and distinguish clearly between commercial and library program, a ‘blanket’ of brick is laid over the neighborhood and the libraries pyramidal heart. The Library sits on top of this with its floors, walls, ceilings and even doors made of the same brick. This consequent materialization supports the public status of the library by communicating clearly the difference: behind the glass hood a library is visible, behind the brick sits the rest of the program.

Another reference to the towns agricultural past lies in the libraries bookshelves. Made of recycled flowerpots these elements are simultaneously fireproof and economic and provide a perfect background to the books and accompany the visitors through the building by taking on the functions of banister, parapet, information desk and bar. They form another element in the building’s palette of brick, glass and wood: recycled materials. Book shelves out of reach play an important visual role, housing the libraries archive.

Following the maximum permitted volume the Book Mountain is covered by a barn shaped glass envelope with wooden trusses resulting in a transparent almost open air library. Underneath the glass is a public space without air conditioning. In summer natural ventilation and sun screens result in a comfortable indoor climate, in winter under-floor heating and double glazing maintain a stable interior environment. The climate system is based on an innovative combination of proven technology such as underground heat and cold storage, natural ventilation and many other interventions. The award winning invisible integrated technology was developed by Arcadis in collaboration with MVRDV.

The new public library is part of a larger plan to strengthen and intensify the town centre. MVRDV have also designed the neighboring development of 42 houses for a local housing corporation. The apartments inside the plan vary strongly in size, from studio apartments to housing fit for large families, attracting a more diverse urban population. A folly-like tilted house is the centre of this ensemble of abstract traditional typologies: contemporary reference instead of nostalgic replica. Housing and library share a common materiality, public space and environmental technology. In terms of identity the project resembles an out of scale farm, at the same time referring to, and becoming, a monument to the agricultural past of Spijkenisse, and its growth towards a city. On the new market square the outlines of buildings demolished during the 1960’s mark the old centre which has been turned now into a new village centre for a growing town, not nostalgic yet respecting the history.

The development of Book Mountain and the Library Quarter is currently translated into literature: titled “Make Some Noise”, later this year a mix between literature and photo novel will be published by 010/NAi Publishers describing the almost ten years it took realizing the project.