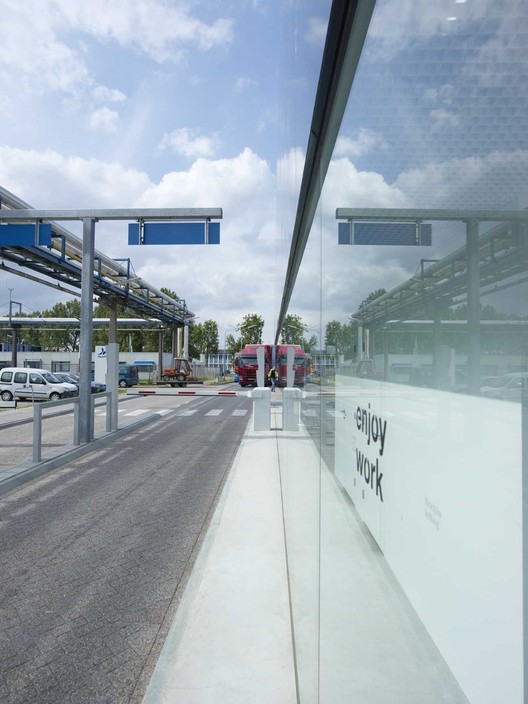 Industriepark Kleefse Waard is a successful business park in Arnhem focusing on innovative technologies. The park is spacious and features numerous beautiful industrial buildings both old and new.

One of the keys to the success of the IPKW is the safety policy; the premises are under permanent surveillance. The park is fenced and features a porter’s lodge. Visitors, employees and suppliers find their way to the terrain via this reception area. The lobby is open 24 – 7. All visitors are registered and announced and subsequently directed to their destination.

In order to improve logistics the access road to the IPKW needed to be doubled. This meant that the existing gatehouse had to make way…

But such heavy duty infrastructure is hidden in the first floor of the existing structure that it turned out to be impossible to demolish the building; an electronic highway is actually running through it… Cutting the wires would jeopardize the operations on the entire park. So some sort of surgery was needed.

Part of the existing building was sliced off, the skin removed and a new body with slightly different proportions was composed around the remaining structure. Transformative re-use.

Below the Black Box, inside the all glass lobby two objects are placed, a back office and a front desk that features 360 views. In the lobby people can prepare for their appointment, grab a snack or a newspaper. The lobby is enveloped in single glass, which renders the building particularly transparent, much more transparent than most other present-day buildings. An intermediate climate comes into being, between the office space and the exterior.

The specific properties of retro-reflection create intimacy; a unique relationship between the light source, the reflective object and the observer is established at every moment.

The object will change color depending of the temperature of the light source. Brake lights will create red glow, blinkers will evoke a pulsating orange.