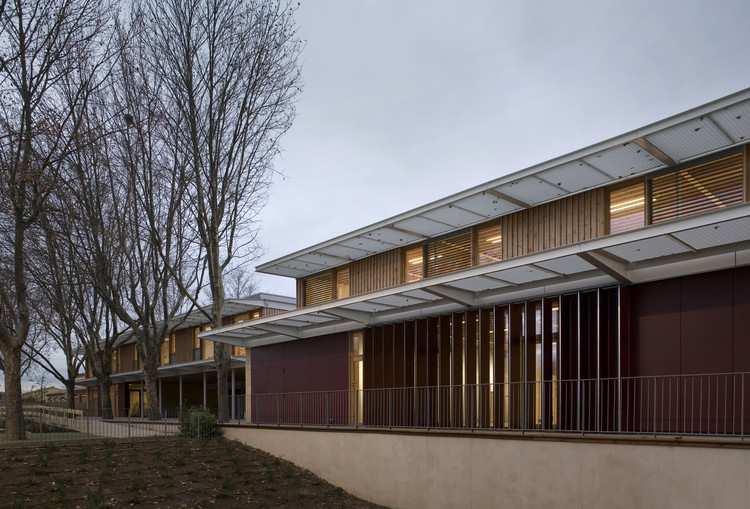 The Jean CarriËre nursery school in Nimes (southern France) is located in the Haute Magaille neighbourhood, south-east of the city centre, in an area of low-rise housing. The former Platanettes school, which was in prefabricated buildings, was demolished to make way for a modern scheme, with a commitment by the client to ambitious environmental objectives, particularly adapted to the Mediterranean climate.

The plot is characterized by its landscaped setting. Existing large plane trees form a remarkable framework of greenery, create a warm atmosphere, and act as natural climate regulators. The proposed scheme preserves most of them and associates them actively with the architecture.

The second major factor concerns the habitability of the site, which is subject to a major constraint related to drainage. The street that runs alongside the scheme is a storm water run-off corridor. The flood risk prevention regulations put in place by the City of Nimes limit occupation of the ground floor and require the classrooms to be placed on the first upper floor. This arrangement, which is quite atypical for a nursery school, is turned to advantage by the architects, who propose a building that is suspended in the foliage of the plane trees. From the classrooms, the children have a unusual pleasant view of the school’s natural setting.

In order to reduce the mass and impact of the scheme, the building is broken down into four volumes, which seem to slide between the trees. These volumes, occupied by the classrooms and the leisure area, rest on a series of solid stone walls arranged on the east-west grid lines, and on the north-south lines of slender metal columns. This heavy-light contrast is one of the distinguishing features of the scheme.

The cross-shaped plan allows simple, clearly visible operation. The circulation areas are not just ordinary corridors. They are treated like habitable areas, widely open to the landscape, with views in all four directions. The partitions between the classrooms and the circulation areas are partly glazed, to allow through views from one external wall to the other. The internal atmosphere is similar to an open-plan office area, as opposed to the conventional type of corridor confined between enclosed classrooms.

The ground floor contains the canteen, the multi-purpose room, and the ancillary and service areas. These areas are divided into two self-contained blocks, to preserve the openness and transparency of the whole. The unconstructed areas in the west are used for the schoolyard and the covered playground area, while the east side is used for parking. The covered playground area is extended by raised timber decking, which is itself extended by a lawn play area. At the south-west corner, a storm water retention pond forms a wet garden, inaccessible to the children, which physically represents the site’s liability to flooding.

The main elevation facing onto the public space is the south gable. Its limited size is compensated by two large cantilevers, one on each side of the entrance, which is itself framed by two solid stone walls. Together with a raised forecourt, it presents the visible face of the facility on the street, with the school entrance clearly expressed. After going through the glazed entrance lobby, there are two possible routes, one horizontally to the schoolyard and the canteen, the other via stairs to the classrooms on the upper floor. The colours and lighting of these two routes are given deliberately playful treatment.