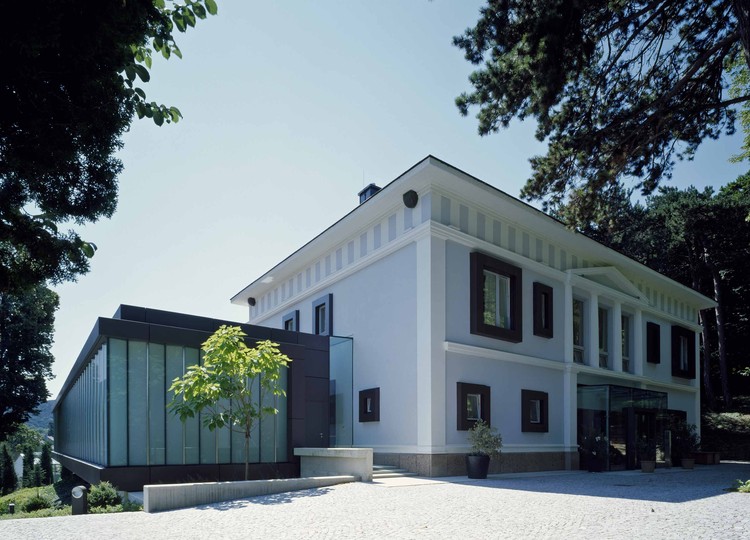 Text description provided by the architects. The basic structure of the existing old building is retained, although it is refurbished and the roof storey extended.

As historical elements, the facade, with its decorative elements such as pilasters, columns and gable constructions, as well as the Head of Adam (made by Rudolf Hausner) in the tympanum on the garden side, remain unchanged in their architectural language. The only alteration is that all the window elements are replaced and can be recognised as a contemporary intervention. Their functionally correct position in space makes them seem like pictures hung on the facade. Protective blinds against the sun and insects are integrated into the broad window frames, which are made of powder-coated aluminium sheeting.

In front of the living area on the ground floor is the newly erected garden terrace – the Tableau – with a seating area covered by a pergola, an open fireplace, a water basin and an outdoor staircase leading to the sun deck in the wellness wing. Its horizontal geometry and slightly greater height above the adjacent area, articulates a clear demarcation from the neighbouring landscaped park area, with its distinct slope. The geometry of this is encompassed by a surround made of prefabricated concrete components, accentuated in the dark by indirect illumination. It frames the new ensemble of old and new like a bracket running around three-sides of the buildings. A biotopic swimming pool adjoining the south corner of the Tableau continues the design geometry.

When it was built at the beginning of the 20th century, the whole building was oriented toward Mödling’s castle ruins. The new design resumes this theme.

In contrast to the villa typology of that time, which the distinguishes the principal level from the surrounding landscape, the new design concept attempts to achieve a smooth transition from the external space to the interior by various means: elevation of the garden level (Tableau), angular arrangement of the new building to the old building, and the use of large-scale openable glass elements.

The new building can be entered both directly from the forecourt, and from the hall of the old building via small bridge. The interface between the old and new building has been developed in the form of a glass construction on wall and the ceiling. Inside, this is continued by a ceiling slit of the same dimensions, which allows daylight to enter the cellar rooms of the old volume through a perforated metal lamella construction.

The steel-concrete supporting structure protrudes far out over the steep slope to the main road. A translucent, folded glass facade forms the outer shell on three sides. At night, this makes the volume reminiscent of a glowing lantern. Towards the garden terrace, a metal holder (protruding freely into the landscape on the south side) frames the sliding glass doors in front of the swimming pool (south-west facade). This makes it possible to park the doors when they are open.

The flat roof is covered with greenery and has a wind-protected sun deck, accessible by an outdoor staircase. Protection from the sun and visibility (on the street side) is here provided by a wall panelled with larchwood boarding.

In connection with the existing villa and the green area which is developed as the Tableau, the wellness wing is defined as an intimate free zone. Its position on the property also means that it is an architectural element that is protected from visibility and noise from the main road. 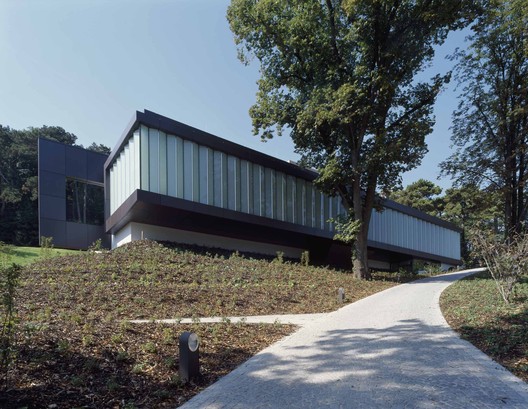