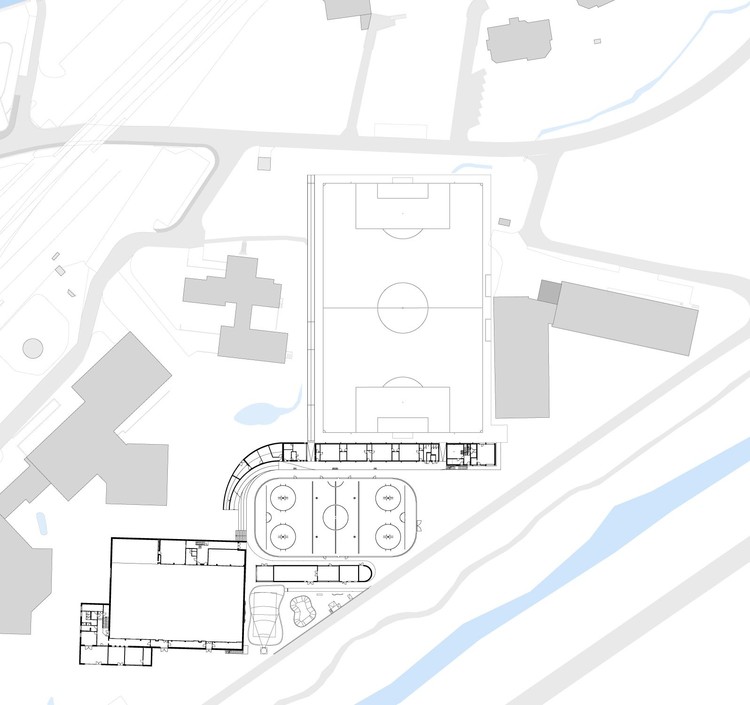 The promulins arena is provided in Samedan between train station and Inn River.

The initial positon of the new sport- and leisure centre was the existing multi-purpose hall. The cloakroom-building as an disruptive and narrow element between the synthetic turf field and the hard court / skating rink is arranged in order that the roof is generating a tribune for all sports. The technical building defines the hard court in the south. The space ends at the Inn-side with a skatepark and a combined beach volleyball court with a shot put and a long jump field.

The dynamic and floating form of the building represents the flow and the motions of the athletes. The growing concrete slab in the north, which houses the cloakrooms, forms, through a folding at the end, the comfort for the Stübli and restaurant. The western dado and the technical building consist of a exposed concrete, which was formed with rough larch planks. They created a gloomy and rough texture on the concrete. The mark of the single planks are cleary visible. The theme of rough larch planks is repeated by the use of them in the wood construction.

The first floor is folding by a clean mould from the base. The round cuts refer to the round end of the building and combined in groups they provide light for the rooms. According to their use the cloakrooms in the ground floor are lined with robust three-layer slab (spruce). This is also found in the restaurant, however with larch.