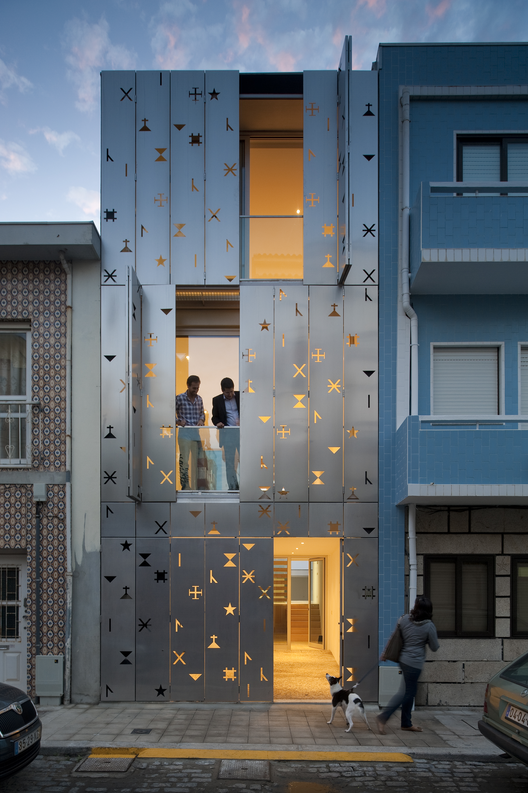 Text description provided by the architects. Póvoa de Varzim is a city profoundly related to the sea and fishing. Its great cultural richness became an interesting stimulus to the project. In fact, the house was an opportunity to revitalize some of the city's memories and to participate in the panoply of colours and materials that characterise the street.

The house is simple... it is organized in a vertical and hierarchical way. The social areas are on the inferior floors and the private areas on the superior levels. To achieve great visual amplitudes and dynamic interconnections between spaces, the interior was structured in half floors. The width of the plot decided the stair. In fact, it became the heart of the house. A wall painted with Blue Klein emphasizes its importance and continuity through the spaces.

The west facade is covered by aluminum venetian blinds that not only defend the interior from the insulation but also open the house to a small garden. At east, the house gets its identity. The intimacy is guaranteed by stainless steel panels, perforated with the "siglas poveiras". These symbols are a proto-writing system once used as a way of communication and to mark personal and fishing belongings. Also, they were hereditary and constituted an important family legacy that was transmitted by inheritance through generations, evolving with new combinations.

In this way, the house, in the very centre of "Bairro Norte", shares some of the city's memories and references with the population and revitalizes a legacy that has been progressively forgotten and abandoned. Quietly, the house confesses its pride in the city...