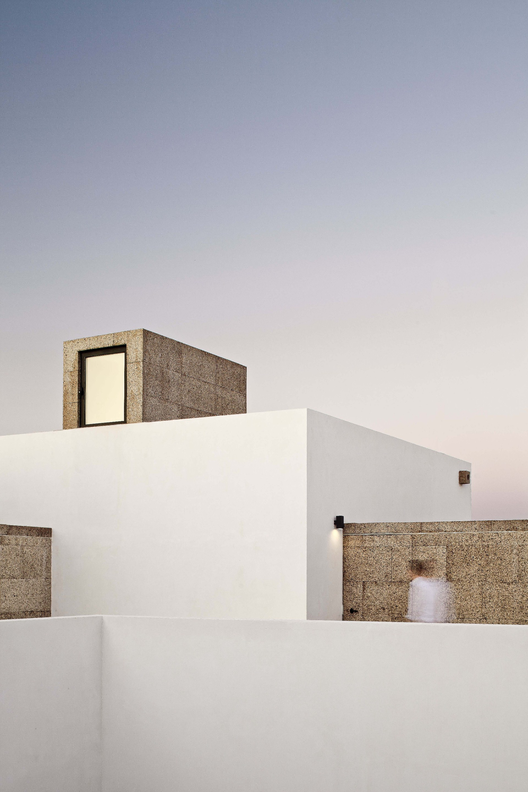 Text description provided by the architects. With important architectural remains of the Neolithic period, through constructions of the periods of Roman and Arab presence, from the Middle-Ages to the present day, the Alto-Alentejo is one of the culturally most interesting regions of the Iberian Peninsula.

Devoid of large aquifers, the region extends in a slight swell, punctuated by small elevations. Human occupation has always sought the more elevated points of this area, particularly for defensive reasons and purpose of dominion.

It is also on the slope of a small hill, on the outskirts of the ancient town of Arraiolos, where there is built a small touristic guesthouse designated as Villa Extramuros.

Surrounded by an extensive olive grove, its scale and form of implementation recover the concept of the old manor houses of the Alentejo. Nevertheless, its architectural features derive also from the clear lines of modern and contemporary architecture.

Spreading over two floors, the white facade, with few openings, gives the building a distinctive and abstract look.

Built as a dwelling for their owners and as a small hotel, just two large openings on the ground floor, corresponding to the dining and the living room, are establishing a relationship with the exterior. The surrounding landscape of extensive olive groves, nearby pastures and the town of Arraiolos in the distance form an appropriate bucolic background.

One of these openings contains also the main entrance. The ceiling, walls and even the entrance door are lined by cork, thus giving the entrance a warm and sensual atmosphere.

The reception area, kitchen, dining room and living room are arranged around a square-shaped courtyard, at the end of which an external staircase gives access to the upper floor.

The construction encloses a central patio allowing the entry of sunlight into all parts of the building. The main circulation is external, surrounding the patio.

This distribution of space reflects also the spatial organization of the ancient monasteries of the region, with dining room, chapter room and kitchen grouped around a central cloister.

The upper level is divided into four separate ‘volumes’ which provide a more modest feel to their interiors. White and austere, these volumes are connected by low cork-coated walls.

Four guestrooms are distributed on two of these volumes, while the master suite occupies the third volume entirely. The fourth volume contains the living quarters of the owners.

Each guest room is oriented individually to a private courtyard, through which is also gained access to the room. Enclosed in walls lined with cork, these outdoor spaces gain a panoramic view of the surrounding landscape through horizontal openings in their outer walls.

The construction resembles most of the typical architecture of southern Portugal. It is characterized by its formal simplicity, the use of few materials, the volumetric arrangement and construction details used.

The fragmentation of the upper floor into four smaller volumes, their separation by lower walls and the typology of the small patios finds its parallel in domestic and vernacular architecture of towns and villages in the region.

The high level of service offered by their owners, the diversification of spaces available to guests, the small scale enterprise and the particular character of its contemporary interior spaces make this venture unique, thus completing an existing touristic offer based primarily on tourism in traditional historic buildings.