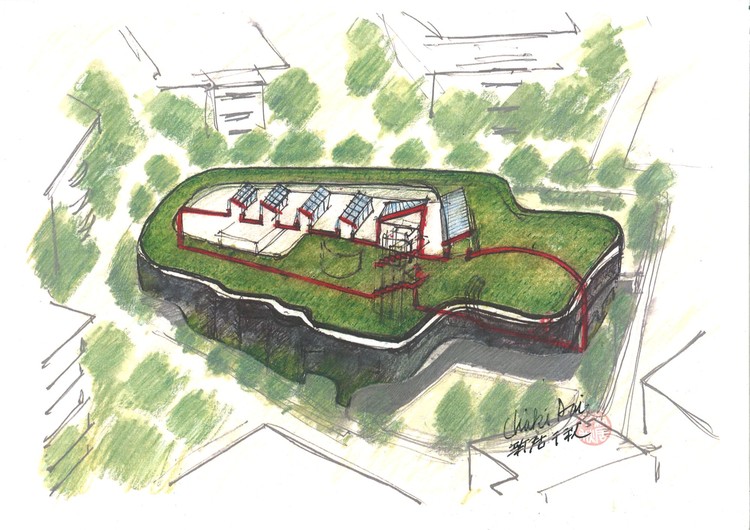 The site was a small hill. The memory of people who played in the hill and had grown up was restructured as this building. To adjust the vertical interval of the site, the west part of the building is two stories, and the east part is single story. As a complex of three programs, the main entrance of its community hall and its library is set on the west side, and the entrance of the children’s house is set on the east side. The pavement and the trees are newly set around the building, and to revive the site’s memory, the roof is covered by wavy green reducing heat island effect.

Tama City government, the client, was planning this project with another designer, but the residents’ agreement was not obtained and it stagnated. Then the city assumed that it advertised for the idea again as a result of the discussion. The design competition was held for requesting the idea that corrected an old idea of three stories. We proposed the building of universal design of two stories fitting geographical features of the site. In an open review, we were selected as the new designers. After its opening, the building has attracted more than 650 visitors every day.

The design team thoroughly talked about building with the people of the citizens and the administration in workshops in parallel with its design process. They also investigated and measured every part of all similar facilities in the city, and talked how those facilities have been managed and problems in those facilities. Its results are reflected in its design. Citizens who talked about a single size of the room and its use, and the enthusiasm of the public officers who had cordially dealt with it, those were impressive.