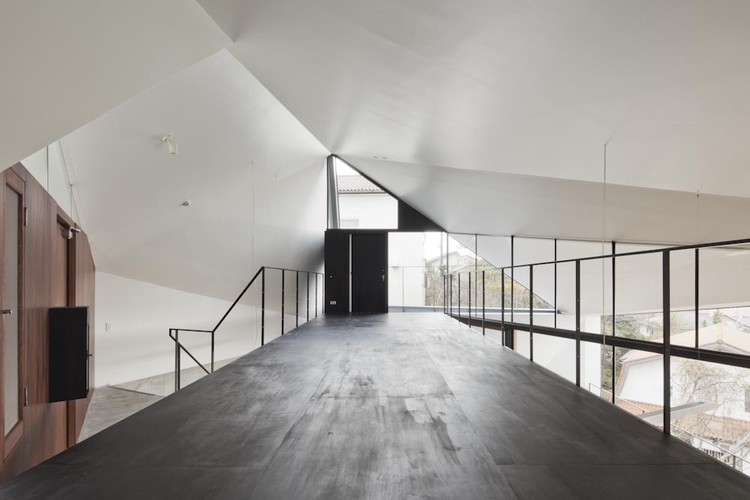 A small house located on a steep slanting slope. The client simply wanted a life with a blessing of nature nearby and the beautiful townscape in distant.

Left only a very narrow flat part which is barely enough for a car, the site was steeply sloped down, almost like a cliff. We first had an idea to excavate the ground to generate a living space.  Corresponding the nature form, heterogeneous and flexible space would retrieve the enchantment of the site. Not a house constructed on a cliff, but a habitat generated by the nature form of the cliff. A habitat like a pit or a shed posteriorly discovered in the terrains of landscape.

So we dig the earth to make the “floor”. Then a “sail” was set on that dent. The structural image of the generation of this “sail” is that the closed and self-contained systems like a polyhedron or a sphere, came down to the site and was spread up through anchoring to the earth. Now we’ve got a certain volume on a steeply slanting surface wrapped with a pitted earth and the sail-like tent on top.

Then we put a flat and straight deck bridging the vacant space. There’s no function assigned for this deck for the moment. But you might have moments in the life surrounded and protected by the earth that you need a place detached from the ground. There’s no partition dividing space, but level differences by a deck and a pit that generate characteristics for the empty space. The uses are not regulated except the bathroom. You think how to use while in use, through the direct feeling to your body. 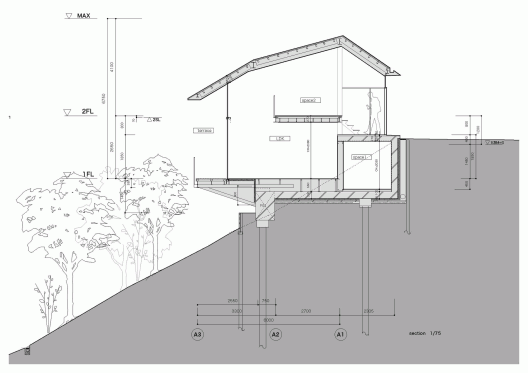