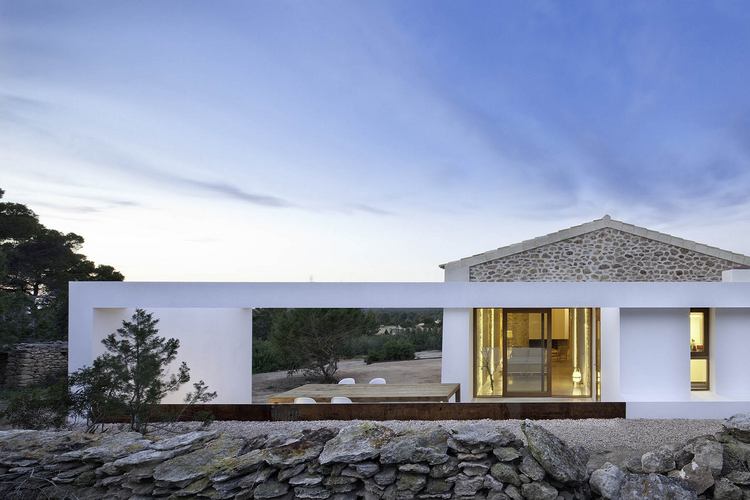 Text description provided by the architects. Can Manuel d'en Corda is located on a plot of 19,060 m2 of rustic nature in the area of the Venda des Cap de Barbaria, in the west of the island of Formentera. The most significant pre-existing conditions, which have been maintained and enhanced through the project, are a small forest of pines and junipers located in the west area of the estate and the old house Can Manuel de'n Corda, which reflects the scheme type of the domestic vernacular architecture developed in Formentera between the late eighteenth and mid nineteenth century. The volume of the main body with simple pitched roof gable and southeast orientation, and its roots in the landscape through the tradicional dry stone walls, highlight the link between this type of building with the farms next to which they were located.

The extensive briefing for the project has been arranged so that while exhaust the urban parameters allowed by the current planning, it distorts as little as possible the existing house and, simultaneously, has its volume so that it has less presence possible from the immediate fragile environment. This has been possible through the use of a fragmented volumes available on ground floor in non-orthogonal disposition, offsetting in midsection plant about the level of the existing house,and adapted to the topography as well as keeping intact the facades characteristics of this architectural style ( southeast and northwest facades, where they were all original openings). This will resort to the ends that were originally blind (northeast and southwest facades) for connections to pieces of new creation, and to realize the new openings that allow better use of natural light.

Although it has been maintained the original main entrance of the house with its southeast orientation, at a strategic level the new house turns its back on the road which limit with the plot by the East side. Thus the extension of the home overlooks enjoys the best views to the northwest, which overlooks the island of Es Vedra, an iconic element of the southern skyline of the neighboring island of Ibiza.

In the original house have been maintained the common areas (living, dining, kitchen and terraces), while on the ground floor of the expansion have been concentrated the bedrooms and service rooms (laundry, cellar, pantry , etc...) and technical premises on the basement.

Of the expansion volumen are relevant the wiews that cross the building through the interstices between the different orthogonal geometric modules that contains the 4 rooms with bath of the ground floor. Of these gaps the most important is the transparency that exists in the contact between the extension and the existing house. This subtle touch helps to clarify the limits of each building.

The above mentiones transversal interstices are reproduced in the basement, creating courtyards that provide light and ventilation and that give warmth to the rooms below while transforming the way they relate to the environment.

The flat roof of the extension is feasible in one lookout-solarium area accesible from an external staircase.

As for the materials used, the proposal has been formalized with a limited palette of materials. Stresses the interior space of traditional housing, where have remained exposed the original stone walls, but covered partially by a new envelope of vertical panels that house the electrical installation and indirect lighting in the 5 cm space remaining between the original wall and the new pannels.

On the ground floor, interior flooring and outdoor terraces are of polished concrete, which expansion joints meet the guidelines for the organization of the different modules, doors, and on site built furniture.

External joinery is made of solid iroko wood, like the beams of the traditional house. The interior woodwork is waterproof MDF painted white.

In the living room has been added new fireplace made of steel plate 10 mm thick. The kitchen and bathrooms are clad in cement of pavement-like finish. The kitchen base units have been executed with marine plywood coated with iroko wood, while the middle shelf that connects to the module of the hood is painted white MDF board.

In the enlargement area, the sloping ceilings of the rooms are left uncoated, in concrete. Also in the bedrooms, beds, headboards and cabinets have been executed on site, as a part of the architecture.

Outdoor pergolas are steel structure painted white with a canes covering that filtres the natural light.

The pool is coated with a very similar to the bathrooms and kitchen cement. The platform surrounding the pool is made of iroko.

In the basement, the floor is natural limestone "capri", placed 1/3 guidelines according to the different modules of the rooms.

The Basement courtyards and flat roofs are finished with gravel obtained from crushed local ocher limestone.

The selection of furniture includes Mediterranean design classics like the Torres Clave armchairs or the Miquel Mila's Cesta luminaire, as well as traditional esparto skating chairs made by local artisans. The made to measure furniture is mostly made in iroko wood with natural finish.

The adaptation of the topography to generate the approach paths, earth retention and planters, was made with Corten steel plates 10 mm thick.

Despite having retained much of the existing vegetation in the area of intervention, the wound generated in the territory during the works has been healed by the palntation of native vegetation that requires little maintenance. 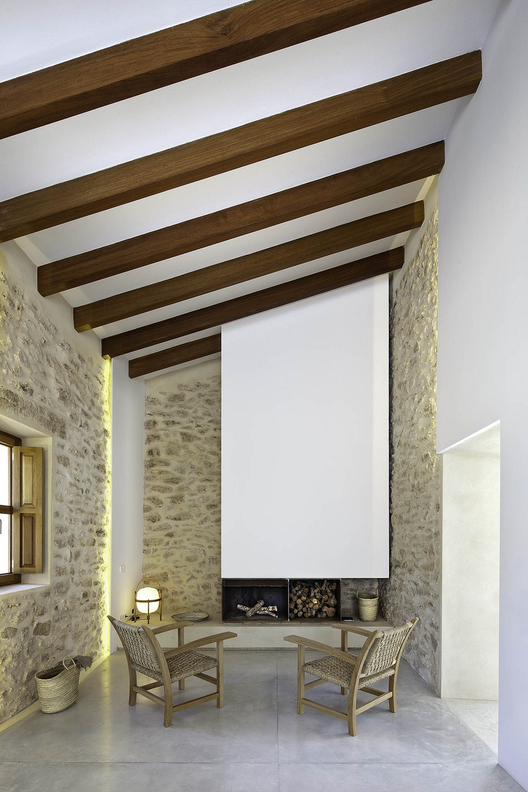 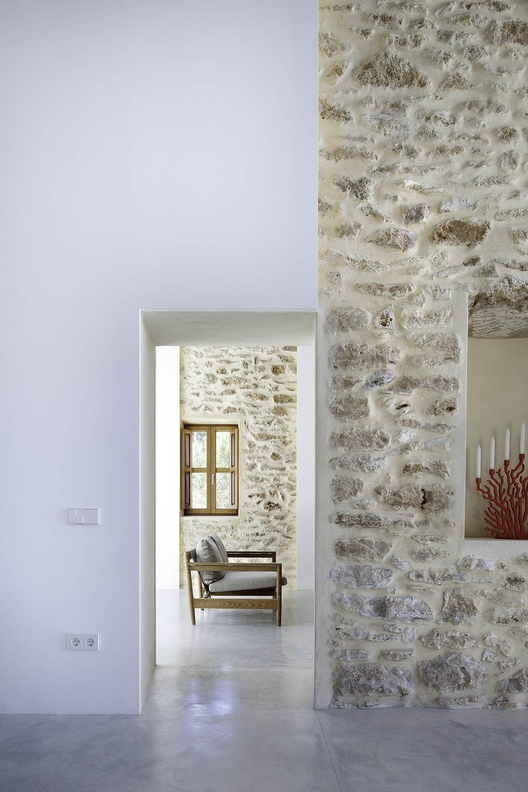 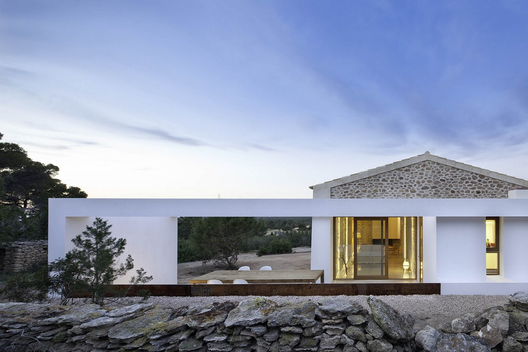