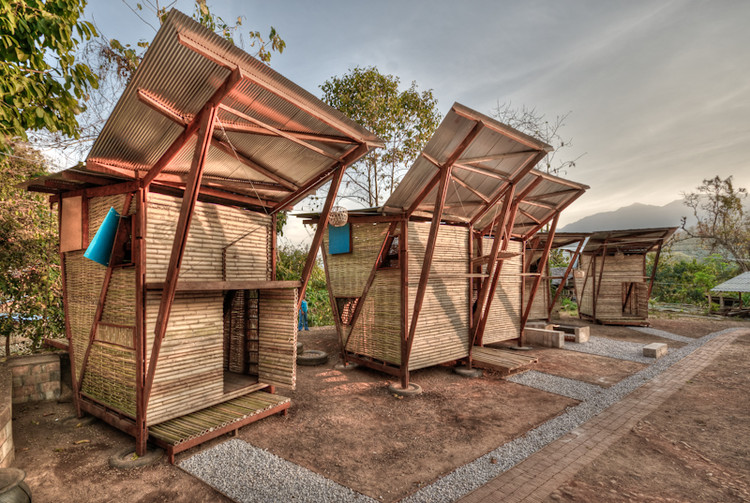 TYIN tegnestue is a non-profit organization working humanitarian through architecture. TYIN is run by five architect students from NTNU and the projects are financed by more than 60 Norwegian companies, as well as private contributions.

Through the course of the last year TYIN has worked with planning and constructing small scale projects in Thailand. We aim to build strategic projects that can improve the lives for people in difficult situations. Through extensive collaboration with locals, and mutual learning, we hope that our projects can have an impact beyond the physical structures.

In the fall of 2008 TYIN travelled to Noh Bo, a small village on the Thai-Burmese border. The majority of the inhabitants are Karen refugees, many of them children. These were the people we wanted to work for.

A few months prior we came in touch with Ole Jørgen Edna from Levanger, Norway. Edna started his orphanage in Noh Bo in 2006, and was now in need of more dormitories. From sheltering 24 children, the orphanage would grow to house almost 50. The Soe Ker Tie project was finished in February 2009.

The main driving force behind the project was to somehow recreate what these children would have experienced in a more normal situation. We wanted every child to have their own private space, a home to live in and a neighbourhood where they could interact and play. These six sleeping units are our answer to this.

Because of their appearances the buildings were named Soe Ker Tie Hias by the workers; The Butterfly Houses. The bamboo weaving technique used on the side and back facades is the same used in local houses and crafts. Most of the bamboo is harvested within a few kilometers of the site. The special roof shape of the Soe Ker Tie Houses enables an effective, natural ventilation, at the same time as it collects the rain water. This renders the areas around the buildings more useful during the rainy season, and gives the possibility of collecting the water in drier periods.

The iron wood construction is prefabricated and assembled on-site, using bolts to ensure reasonable precision and strength. Most of the materials is delivered by the Karen National Union on the Burmese side, and this dependency on tropic timber has led to a line of difficult and complex problems to be addressed.

By raising the buildings from the ground, on four foundations cast in old tires, problems with moisture and rot in the construction are prevented. After a six month long mutual learning process with the locals in Noh Bo we hope that we have left something useful behind. Important principles like bracing, material economization and moisture prevention may possibly lead to a more sustainable building tradition in the future.