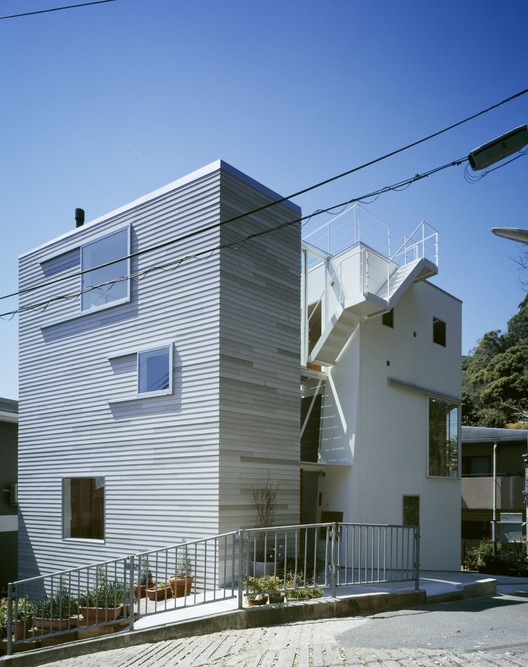 This is my parentsf house uptown Kobe. The site appeared to be a cave-in with an apartment house on the south and another on the west, and on the north a path runs, two meters leveled up, along the side of the mountain behind. We studied to find architecture worthy of such particular site conditions as well as the overall environment of extending view of the downtown and the sea beyond and the nature of the mountain just behind.

Through checking the limit of regulation setback from the path for the site of such peculiarity an idea of a structure with parallelogram cross section occurred to us. As growing up the parallelogram as it is beyond the level of the path, however, was anticipated to be overwhelming to the passers-by and to violate the environment, it was divided into two parts, namely east housing and west housing. The void in between the two was used for a stairwell.

The south side of the two housings were made structurally connected, and the roof and balcony are extended to resemble hyperbolic paraboloidal shell construction, resulting in a comfortable space below like a little courtyard in association with the neighboring apartment houses.

The approach to stairwell was intentionally sloped up as the paths nearby were all sloped. The slope was extended through the stairwell floor, which helped secure basements with sufficient height of ceiling while installing an elevator from the first floor to the third.

The whole house is provided with nine rooms of features peculiar to each. Walking through them would change the scene dizzily. You might be in an alley, in a cave or on a rooftop. The stairwell is like an alley with housing on both sides. The floor of stairwell is inclined. The ground in the large picture on the wall is also inclined. An excessively large skylight is homogenizing the outside and the inside. Pieces of furniture are combined with stairs. Mirrors are introducing the sky or the green of the mountains. A washstand seems to be a dining table in the mirror. All these would cause the focus of your consciousness to be parried, and accordingly even the wall of the apartment house and the air conditioners thereon, etc. would seem to be somehow floating in the air, and thus would be felt kind of peaceful.

Surprisingly comfortable thermal condition of living has been experienced throughout the four seasons. The air in the living room on the third floor absorbed solar radiation through the skylight in winter, and in summer it made air conditioners useless to shade the skylight with the leaves of vine and to utilize ventilation by gravitation and breeze through windows.

A contributable factor will be the climate of Kobe where the mountains and the sea meet. This example may hint an idea for architecture in peculiar to Asian monsoon region.