Save
AD Round Up: Brick Houses Part I
Share
Or
Copy

I’ve always like brick houses. There are just so many ways to use brick and make it look amazing on your place. So to show you some really good examples, we bring you our first selection of previously featured brick houses on AD.

Richmond Place House / Boyd Cody Architects The house is located in a conservation area close to Dublin’s city centre, on a small but prominent infill corner site at the junction between Mountpleasant Avenue and Richmond Place. A modest dwelling built to replace the existing cottage located on the site. The accommodation consists of 2no. bedrooms, 2no. bathrooms, kitchen, utility and living / dining area set over three separate levels (read more…)

House Baetens / JagerJanssen architecten The intersection of a planned green strip and an existing avenue provide an architectural opportunity for this a two-storey dwelling. The first floor appears to be cumbersome and heavy materialised: dark bricks with continuous seams result in an abstract rugged character. The second floor will be a wooden shaft: lighter in colour, weight and design. The cooking ilse is lit by a translucent plane (read more…)

Mona Vale House / Choi Ropiha The client for the project has a long standing interest in building sustainability developed through working at the Sustainable Energy Development Authority, a government agency in sustainability. With this interest in mind, the client approached Choi Ropiha to design a house that would demonstrate and test a number of active and passive sustainable initiatives whilst accommodating a contemporary coastal lifestyle (read more…) 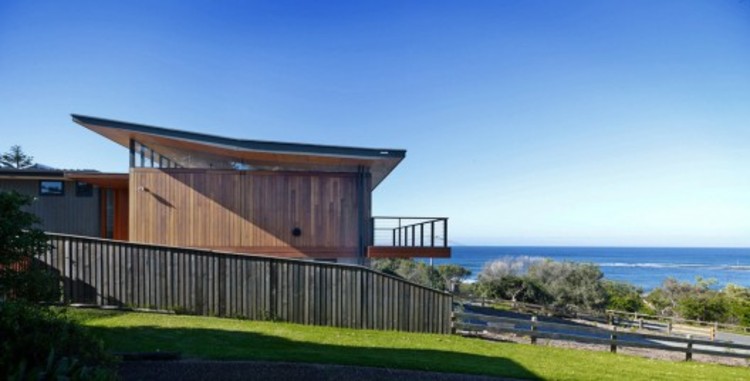 The house of Clay and Oak / Dow Jones Architects Poplar Cottage is a small house on The Green in Walberswick built in the early 1920s. Over the past eighty years a number of piecemeal extensions had resulted in a peculiar internal organisation that cut the house off from its garden. Our brief was to demolish it and to make a new house, but initial conversation with both the planners and Parish Council suggested that there would be much opposition to this (read more…)

Franzen house / SchappacherWhite This house was built on a historic rock outcropping adjacent to an eighteenth century landmark lighthouse facing the sea. This modern classic, almost a fallen victim to total demolition, has undergone a complete renovation and expansion by SchappacherWhite Ltd. and Brennan Beer Gorman/Architects (BBG), that honors Franzen’s original design intent while satisfying the needs of a 21st century family (read more…)