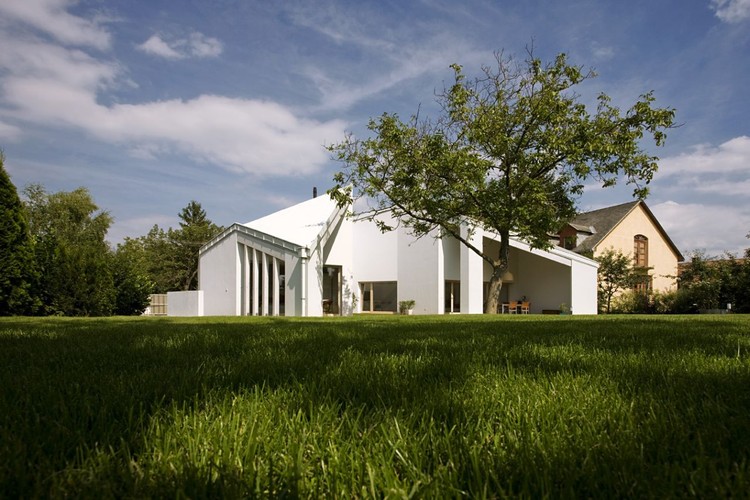 Text description provided by the architects. Creating a calm inner world, the summer house with its semi atrium system turns inside to the backyard garden and shows its back to the immediate surrounding. With the material choices it reflects to the architecture of the area, but with its form the house represents how the architects – Tamas Bulcsu and Eva Fortvingler – think about architectural design.

The designers of the munkacsoport.net experimented with several forms until they finally ended up with the horseshoe ground plan. The volume of the building was determined by the demand of the seclusion and by the Building Regulations of the area. Located on the edge of the town, the plot is quite far from the lake’s coastline and therefore it can not keep direct visual connection with the Balaton. That is why the relaxing atmosphere was created by turning inwardly to the backyard’s green area. The shape of the roof’s volume has been influenced essentially by the regulations: the roof’s angle must be between 37 and 45 degree in most cases in this region, thus creating a pitched roof was required.

The final result is a horseshoe shaped house bent in different angels adjusting its height on both ends to the levels of the neighbouring houses: it is higher on one side meanwhile it is getting lower on the other side. To create a homogenous effect and to emphasize the form itself the building got white covering: there is white plaster on its walls and light metal sheets on the roof.

As the architects says: “Our desire was to create a crescent-like house, a bent house where the walls’ and the roof’s surfaces become one homogenous composition. And because of the building is quite strongly shaped, in order to have a uniform appearance, we decided upon using the colour white, namely the white plastered walls and the white metal sheets.”