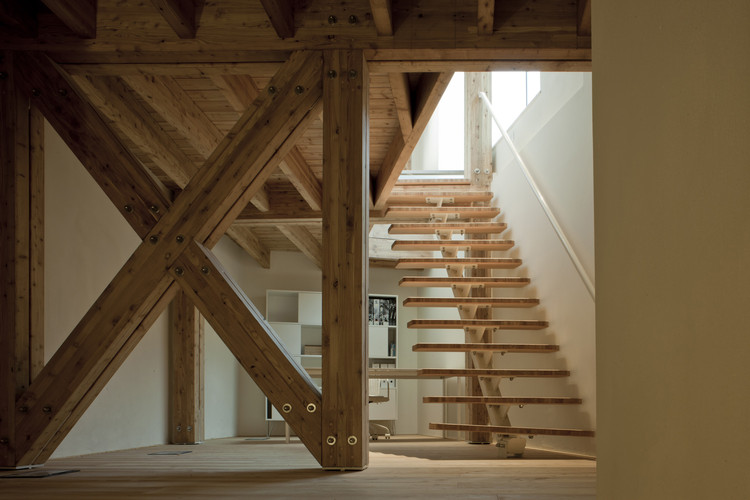 ON THE 12TH CENTURY WALLS

The Ceschi House leans against the 12th century walls of the city of Vicenza. The architects have “listened” to the existing building carefully: restoring the original walls using traditional techniques, while developing the interior as an independent project which allowed the redistribution of the inner spaces in a functional manner.

The vision of the restoration as a quest for sustainability has been pursued in the broadest sense of the term, including technical, economic and energy issues. The aim was to create a lightweight structure, that has a character of reversibility, built with high-tech systems, which allowed a period of prefabrication, and streamlining of the implementation and installation phases.

In the restoration of the Ceschi house, a new structure was designed to fit inside the existing empty walls: a skeleton of laminated larch wood which extends the full height of the building, defining its distribution and establishing a collaborative relationship with the container characterized by an outstanding anti-seismic performance.

The new structure makes no alterations to the exterior load-bearing walls, but replaces the structural function of existing internal partitions with a lightweight frame system. All the elements which make up the structure were prefabricated, enabling a high level of precision in survey, design and execution.

For the thermal insulation of the building, which has been classified as class A, a system of insulating panels were set inside the existing masonry walls, consisting of multilayer insulation laid on a wood and compressed earth panels.

These compressed earth panels have high thermal mass and regulate the humidity of the internal environment, making a marked improvement in the heating and cooling performance of the building, and the level of comfort and well-being of its inhabitants.

In the interior glass is used for its diffusive character both on structural solutions and for interior design: the natural light which flows from the outside is filtered by both horizontal and vertical glass surfaces, creating a sense of continuity between the spaces.