Save
Offices for Bührmann & Partners 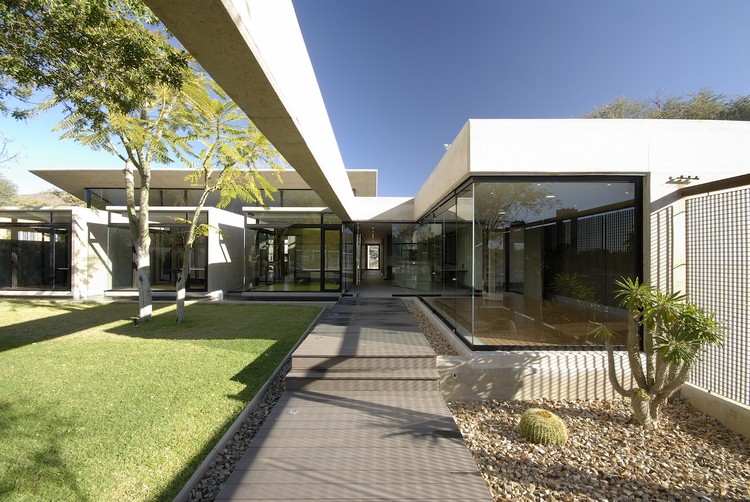 Text description provided by the architects. The result of a mini competition, the Bührmann & Partners office complex is the manifestation of a long-standing working relationship between the respective practices – and more particularly between Sigi Teetz and Jaco Wasserfall – that began almost two decades ago and has since matured into a dynamic partnership. Equally contributing to the project in enthusiasm and skill was a contractor with experience in abundance and a reputation for impeccable off-shutter concrete work.The new building is located on a narrow 1500m2 cul-de-sac property in the residential area of Klein Windhoek. Earmarked for low-density office development in the local town-planning scheme, this area is gradually being transformed but without sacrificing its distinct residential scale. Besides proposing the demolition of the existing house, the clients’ brief stipulated that its immaculate garden had to be maintained. Other requirements included the use of off-shutter concrete and the introduction of a water element. The three partners had to be accommodated in separate offices with views over the garden. Simplicity and geometric clarity were the overriding design aspirations. A long concrete beam, with impressive clear spans, is employed as a prominent circulation axis demarcating a clear approach to the building for both visitor and staff, and separating the production and administrative or service zones. It also serves as a unifying element that ties the various single storey building components and staff-parking structures into a single architectural entity. Conceived as a double-volume container, the large draughting office has a winged and centrally cantilevered concrete roof with clerestory windows to the south and north to ensure sufficient daylight. Individual offices and discussion nodes are attached to the glazed facades of the main volume as cubed pods framing views of the garden from within. A generous roof overhang shades the glazed façades of the main space whilst horizontal louvres provide shading to the office pods. Forming the building threshold from public to private, and physically separating building from garden, is a linear water element. It also was meant to act as a security deterrent, although it was later deemed inadequate and a perimeter fence was added. A brightly coloured curved wall element shields the building from the fierce west sun, whilst providing visual relief and suggesting movement. A minimalist and robust approach was followed in the choice and application of materials, details and finishes: mindful of low maintenance, exposed structural elements are used alongside unadorned concrete, steel and aluminium, timber and glass. The partners’ initial hesitation to the limited application of bright colours in focus areas was largely overcome by presenting them with photo-rendered images of the building beforehand. Design involvement also included built-in furniture and signage. 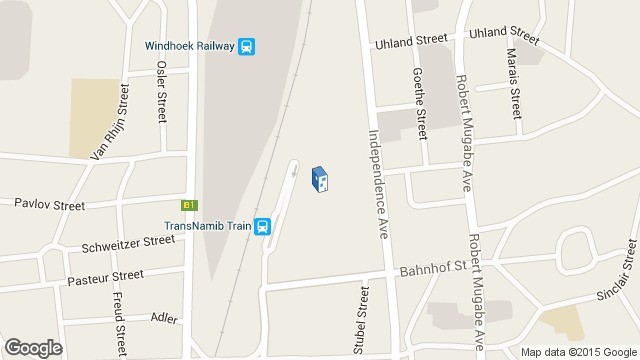