Save
AD Round Up: Beach Houses Part II
Share
Or
Copy

Summer is here. There’s nothing better than enjoy the sun and relax in your beach house. You don’t have one? So look at the second part of Beach Houses Round Up and imagine how relaxing it would be!

TDA House / Cadaval & Solà-Morales A Fresh house for extreme weather that surpasses the standard limits of comfort of the city-dweller; a low-cost house requiring minimum maintenance; a house for any number of habitants, flexible in its uses and configuration; a house that can open up completely to the exterior or close in on itself; a beach house that can be built in a distant corner of the world (read more…)

House in Matinhal / ARX Land is being split in generic parcels of typical resorts, claiming for a superficial architectural idea of a “Portuguese house”, to please and sell to foreign tourists. The house was developed along the precise regulations, defined in the urbanistic project, from distances to borders, access and total amount of construction area and volume. The highest and longest volume is located in the north (read more…)

Metamorfosis 1 / Jose Ulloa Davet + Delphine Ding The project is organized according to a new helical path which, through the extension of an existing deck and the overhang of the new room, allows the user to go up to two new panoramic terraces on the house. The skin on the project is designed as an autonomous unit, through modulated square openings with measures based on a 30 cms. module and a skin with a changing rhythm (read more…) 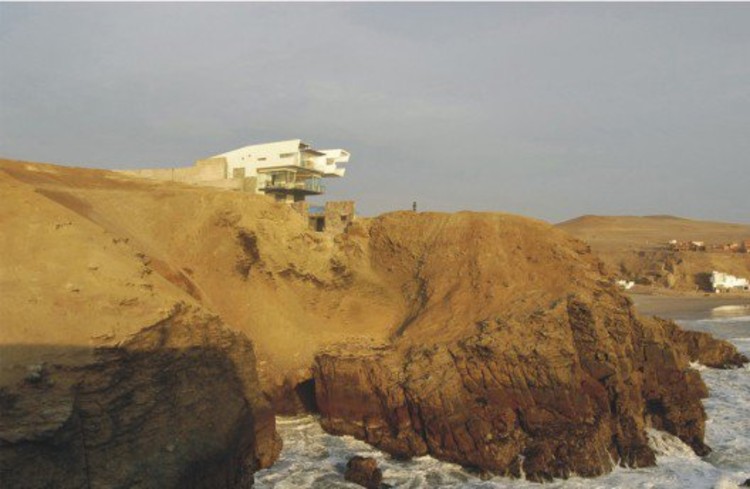 Lefevre House / Longhi Architects Conceived as the place where the arid Peruvian desert meets the Pacific Ocean, this beach house located at Punta Misterio 117 km. south of Lima, is an intervention where the integration of architecture and landscape was an important concern. Sand garden roofs act as the extension of the desert; lap and recreation pools connect the ocean with the house, while a glass box hangs from the structure (read more…)

Guarujá House / Bernardes Jacobsen The whole idea of the project was created when Thiago was visiting the site. There, in front of the client, he sketched what later would be the transverse section of what was being proposed: a vacation house, for a couple and their two kids. A place where they could invite friends over frequently. Designed to be a pavilion supported by only five pillars, with en-suites bedrooms, living room(s) (read more…)