SOM’s new 64-storey Diagonal Tower to be located in the developing commercial and mixed-use Yongsan International Business District in the heart of Seoul, South Korea, exudes a modern take on structural expressionism. The tower progressively addresses the critical issues associated with skyscraper design in an iconic and refined manner. From structural and energy efficiency to reduced construction costs that the tower must meet, SOM have strove to integrate these aspects holistically into the overall aesthetics. More details after the break. 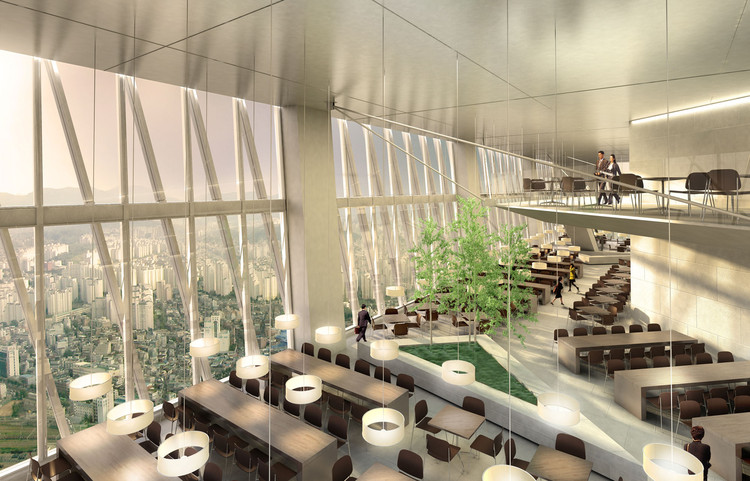 Rising to 343 meters, the diagonal structure serves more than visual stimuli. Somewhat similar to Norman Foster’s Hearst Tower in New York, the diagonal megaframe reduces the amount of steel required by over 25% when compared to conventionally framed buildings. In addition the non-linear vertical surface mitigates wind loading and vortices. Primary structural support is achieved via 4 piers at the corners of the building – which in turn opens up the interior lobby and atrium.

Passive environmental control strategies employed within and on the façade of the tower include sunshades that are positioned according to their orientation – horizontal, vertical, and diagonal – thus, mitigating heat gain in the summer and permitting direct sunlight during winter months. Atypical of skyscraper curtain walls is the triple pane glazing utilized, instead of the standard dual pane seen on the majority of towers. A critical decision in choosing this type of glazing stemmed from SOM’s goal to meet Seoul Green Guideline criteria. Internally, the building incorporates a chilled beam system whereby, thermally active hydronics transfer heat and cooling instead of air. The resultant system surpasses traditional air driven systems both in efficiency and human occupant comfort.