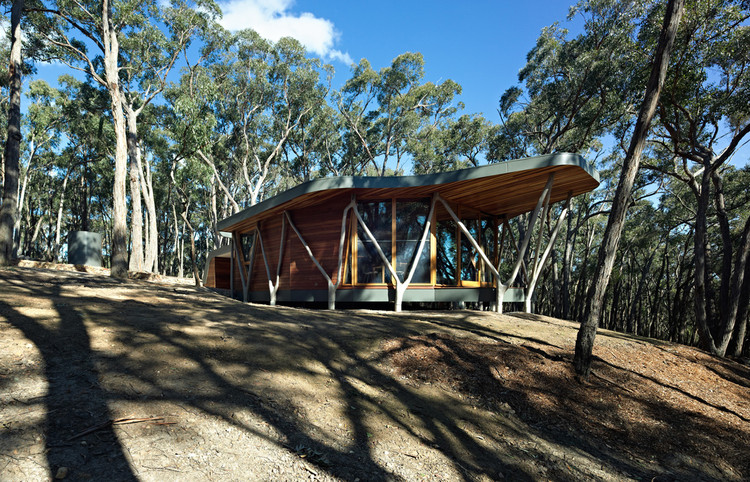 Text description provided by the architects. This project has evolved the building type, the small weekender, by answering a simple question—how does one go into a forest and use the forms of the ecology to build a house?

The project is a small cabin in Victoria’s Central Highlands. The clients are medical practitioners/ academics with a daughter attending university. The brief included a living area, small kitchen, bathroom and two bedrooms. They asked for a small forest cabin in which they could practice choral singing. They desired a small habitat that connected them with the isolation one finds in a forest, and the closeness to the birdlife.

Our practice was interested in the forms of bleached bones of kangaroos and sheep found lying around on farmland. When considering these bones, we were particularly interested in the thickening of the joints required to carry additional loads, and how these structures could be interpreted in found timber. This idea developed into utilising tree forks or bifurcations as the structure for the cabin.

The bifurcations were sourced from forest floors and farmland, and, due to their age, were well seasoned. They were joined to straight columns with internal metal plates by a sculptor. An internal column with radiating beams completed the structure, the complete triangulated truss system attaining great inherent strength.

Stringybark trees were removed from the site to make way for the new house. A mobile milling machine was delivered to site, and the lining boards were milled, cured on site, and then fixed internally. The figuration of the boards in the living room has great character, and relates to the experience of being in the forest. It also results in a minimal carbon footprint for the sourcing and installing of the lining boards.

The design sought to achieve an almost transparent relationship with the surrounding forest, achieved through an eco-morphological transformation of remnant timber into structure. It developed the typology of the small Australian house, conflating it with the precedents of the primitive hut and the tradition of Aboriginal structures. 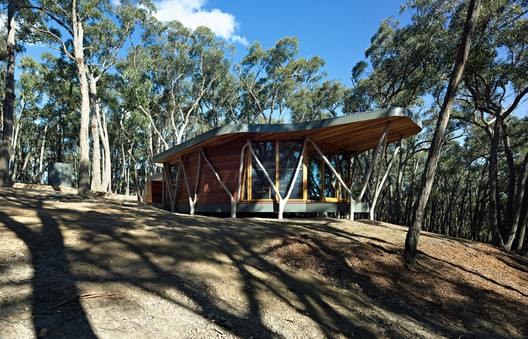