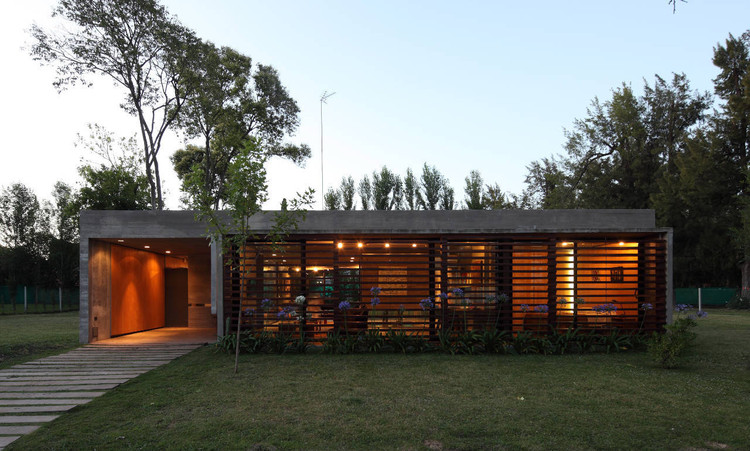 This is a field in a small condominium of 16 lots located in an area of the Buenos Aires Province, traditionally of farms, that with the trace of the Western Highway has been gradually transforming into a permanent housing place. Located in front of the grounds of the National Institute of Agricultural Technology (INTA), this location has long-term guarantee to continue maintaining a privileged position in their quality of life and landscape value.

A house to be used as permanent housing for the Architects Besonías and Almeida, bringing as essential condition, solving the security issues of it, in that remote place and with few permanent inhabitants. This difficulty is compounded by the fact that they would be among the first neighbors to inhabit the small condominium. Of course, the issue of secure closure had to be solved without resenting the internal-external integration, undeniable theme in all the works of the study. The other issue to consider was the flexibility of use because, although it would only be inhabited by the marriage, it had to be prepared to receive many visitors and occasionally host their children. Finally, the condition was that the house must develop itself entirely in ground floor.

The study always faces each new project as an opportunity of research in the theory and practice of architecture. In this occasion, as the resolution of the house security was so important, it seemed interesting to see to where this strong condition could be taken as a generator of the project. How far the formalization was dependent on the solution of the problem, and how far this dependence could strain without affecting the good aesthetic result, always operating within the standard costs for a house.

Reverse an alleged negative condition specific of this assignment and turn it into a solutions search engine that won't waste the potential that this problem entails, was a decision that led to the designers to propose a house which extends up to the party walls to have only two vulnerable fronts. In this way, the two facades of nearly 14 m long became essential elements of this project. Of this first decision and the need to solve the project on ground floor comes almost naturally the proposal of creating interior courtyards to get natural light and allow cross ventilation in all areas of use.

Then it was proposed a resolved home in a plant divided into 12 space modules (four of front and three of deep) of 3.30 m side. Two of them are empty and are proposed as small interior courtyards with the vegetation as protagonist in one of them, and the water in the other. These roofless spaces are added to the adjoining sites, providing a feeling of more amplitude and a changing atmosphere by the effects of the light coming through them and the contemplation of life that develops there. They also offer a cut of the sky and surrounding landscape from the most diverse corners of the plant.

The front facade was projected as a plane composed of stacked pieces of quebracho wood, that gives privacy to the rooms that are placed at the before mentioned front, in addition to solving the sealing of the house. Toward the back, the chosen system to give security to the house should be of quick operation and affordable cost. The proposal was then, a roller metal curtain that when it is opened, it is completely hidden inside inverted beams of the roof and that is activated by pressing a key.

The house is set back from the internal condominium street by a garden and flooring suitable for parking a car, made with quebracho planks buried in the earth. As the house arrives from one boundary of the property to the other, it was necessary to propose, besides to the main entrance, another of service that would enable a direct entrance to the back of the lot so as to solve the maintenance activities of it.

The access to the two doors is by a partially covered area. The front door opens to a single space, with the water courtyard and the green courtyard as main characters. There, can be developed the meeting activities in a flexible way, only determined by its equipment. On one side of this space, and protected from the views behind a hanging partition, are the bedrooms and bathrooms; on the other side are the service entry, the kitchen (which is barely hinted across the courtyard green) and the laundry.

In the background, the different activities of the house are extended in a partially covered area that goes from one boundary of the property to the other, making very indefinite the limits between inside and outside. The house is linked to the pool through a solarium; the rest of the lot is free to begin to be occupied by the planned greenery.

The house plant, of 13.70m x 13.00m, is covered by a serie of reinforced concrete slabs, with inverted beams around the perimeter to hide the slope subfloor and waterproof membrane. These slabs rest on the two lateral dividing walls and on a serie of internal partitions arranged according to the modular and "thickness" grid to also function as storage sites.

As noted, the constructive solution of the front closure plane is an element that required a detailed study since that the property presentation depended on this. It should be an element that would allow light to enter but at the same time would ensure the tightness of the house. It was decided, for aesthetic reasons and for ease of construction, to stack quebracho planks cut in the middle and glued and threaded together and with spacers of the same material, by threaded rods of iron.

In the rest of the house reinforced concrete, the exclusive character, was left exposed without any surface treatment, except in the two boundaries of the property by their exposure to the weather, it was considered necessary to apply a coating of MDF boards on the inside, veneered on guatambú wood, with an air chamber to solve the thermal insulation. There are only three masonry internal partitions around the bathrooms to resolve the plumbing.

Floors, both indoors and outdoors, are of smooth cement wipes, separated by plates of stainless steel. The bathrooms and kitchen counters are concrete slabs with smooth surface and protected by a lacquer. The openings are of dark bronze anodized aluminum with glass with air chamber. The heating is by underfloor. The kitchen furniture and all the doors of the different storage sites are made of MDF plates, veneered with guatambú wood. 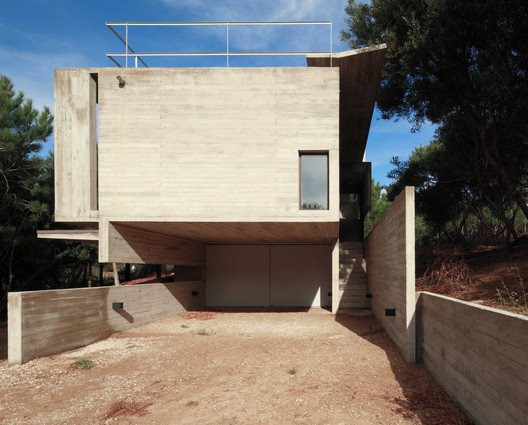 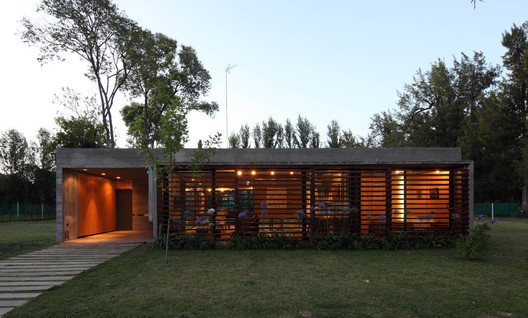