Save
Villa A / QSJW Architects 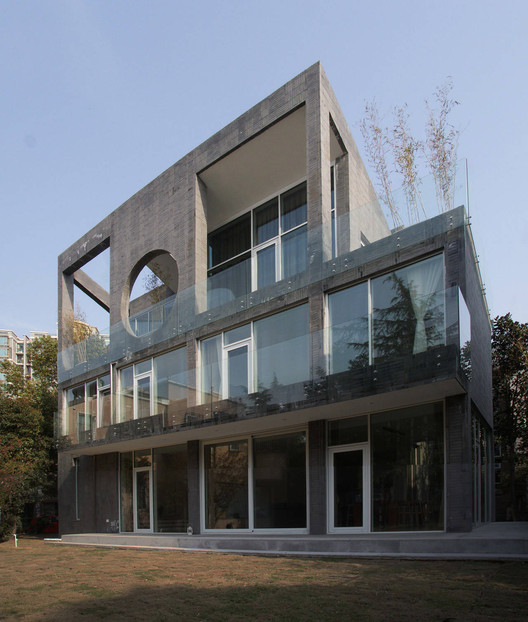 On 2008, the summer August, the first time we visited the site, I remember that was sunny just after rain. All the sunshine came through the green branches, at that moment, we don't know this is going to be an almost 4 years struggling project.

In Chinese traditional garden, there are lots of gates in the shape of circle, which we named “Yue Men”. Same of them could be passed through, some of them couldn’t. Some of them where people take views from and of them are the images to view. Today, when the city space already changed so much that these kind of gates are no longer suitable, then we still withdraw only the form of this symbol. It is our first try for understand, and expecting.

Additional, we used the slice tiles (55mm*235mm*12mm) which is the most similar material as the traditional Chinese brick, used to be as thick as 55mm*235mm*120mm. Nowadays, the local people use this tiles as decoration but still with the layout like it used to be. The tile itself reflects the form of circle, going on for the Garden/Countryside image. Then, we tried a totally different layout. As four pieces of tiles lying together with a separation of 5mm, would be a square in 235mm*235mm. That is our basic module for the layout. With this module, we indicated the tiles’ function for decoration only. We also tried to achieve a special random in this simple construction detail.

The image of “Shan-Shui” is another key element of this design. Different from the traditional Chinese house, we reversed the section of the roof: the “Ridge” is always lower than the “Edge” to win the modernity. Meanwhile, it enriched the volume and arrangement of the roof, which creates different lighting effects.

Later in the interior design, we just kept all the details as simple as possible, just to explore the materials themselves, for a clear environment, a living space.