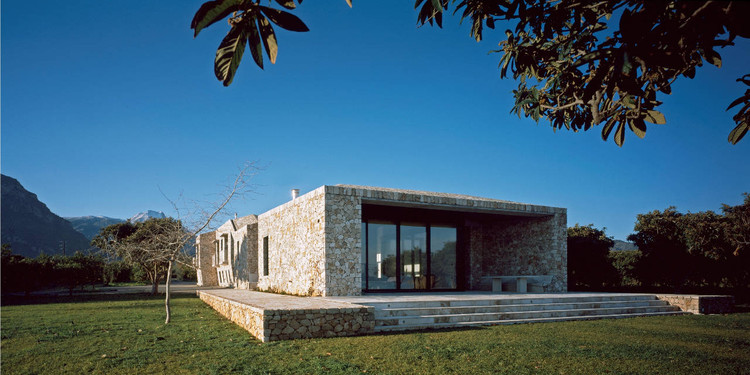 Text description provided by the architects. Seaside Summer House
The dwelling is located In a land with fruit trees reaching the sea, at the old mouth of Kerinitis river. The Corinthian gulf in the north with Evritania in the opposite bank, the gorges of the Peloponnese in the south, with the trapezoidal top Rouskio be raised among them, are the elements among the north wind and the mainsail from the west, that have defined the building design.

The house grows linearly in the north-south axis. It is a stone formation deposited by the torrent streams. Is a regular, solid resting on land that was converted from a stone volume after subtractions, sections and surface removals. The owner’s love for climbing and exploring affected the management of the volume as a monolithic element, using stone on all external surfaces and the patency / approach of the roof.

The eastern and southern side of the volume is punctured, leaving the winter light to penetrate. The openings of the south are sun protected with cantilevered canopies, depending on the openings’ height. The continuous wall to the West is interrupted by a patio, illuminating the public spaces of the house. The outdoor dining area at the southwest courtyard, covered with a roof-strut, is wind protected, accepting also the warm sun of winter. The north arcade, that consists the building ending to the seaside, is the place for summer rest.

The house expands into three levels on a vertical axis to the coast, escalating amphitheatrically, overlooking the sea. The public functions of the residence are placed in a large, stone shelter, which constitutes the lower part of the building. It consists of two levels, separating with a small elevation the kitchen from the dining room. Connected at the narrowest point in the second part, the private, situated half floor higher, in a separate two-storeys stone volume, started buried in earth and rise up.

In the highest level are placed the three bedrooms and below the ground level are the guest house and the utility rooms, using independent entrances. With the opening of the new road Corinth-Patras was great quantity of spare stone, which was used for covering the whole building, pieced together in dry wall. The wood dominates in interior domestic spaces and outdoor halls the paneling made ​​with sheets of anodized aluminum, in the color of frames. 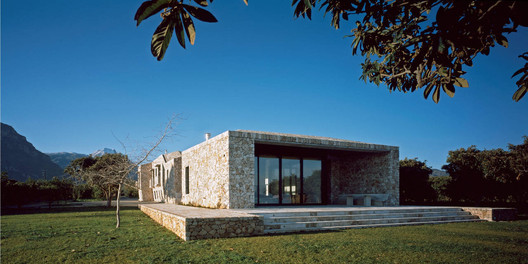