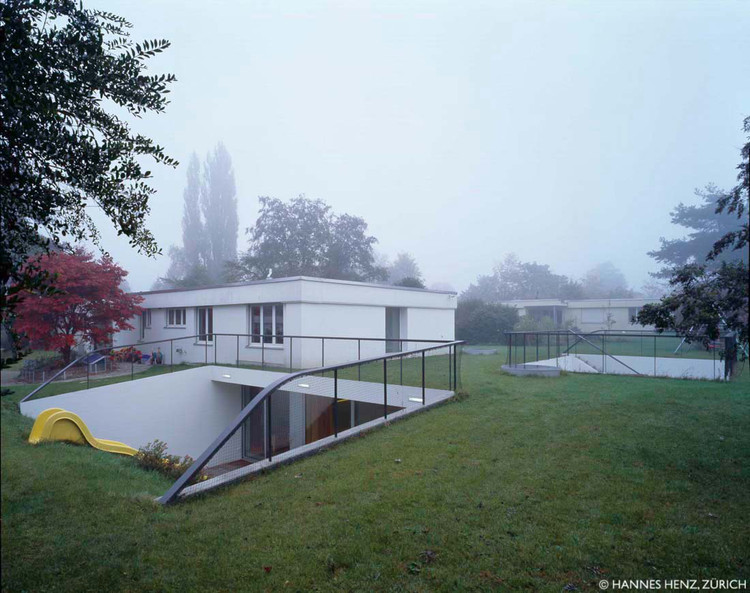 Text description provided by the architects. In fact, all the clients originally wanted was a larger living room window - now their three children live in a patio house of their own.

From a present-day perspective the use of space in this 1960s development of single-storey row houses with basement seems wasteful. The layout of the estate is far from dense, and in terms of the density permitted by the building regulations there are reserves of potentially usable space. But exploiting the permitted density means conducting intensive negotiations with all neighbours affected before any new building project can be started.

As, according to the building regulations, underground buildings do not count as utilization of space, we suggested to the clients making an underground patio house as a "second house" of their own. So we place an independent underground patio house beside the existing house, without adding a single square metre of surface area above ground thus eliminating the necessity of obtaining the neighbours' approval.

While two differently shaped courtyards are incised in the garden, the new bedrooms and a bathroom are attached to the existing basement. A former crawl space was converted into a home cinema and new hobby room. A huge screen fills one of the narrow sides of the room while the opposite wall is completely covered with mirrored-glass. Backlit panels with cut-out patterns are located on the side walls, offering specific lighting situations depending on different uses.

A narrow stairs connects the upper house with the lower one. The gaze is directed through the new south window into the garden. The garden is cleared out almost completely and later filled up again. Through large areas of glazing in the patio and the new windows on the ground floor the principal orientation of the house is now south-west. The courtyards are painted white to transport the maximum amount of light. The bays between the railing uprights are filled with a transparent mesh material. Two circular roof lights provide additional light for the children's bedrooms. They can be closed off with horizontal sliding shutters.

The house and the garden interlock. The increased amount of space underground allowed separate rooms at ground floor level to be combined increasing the size of the living room and giving this initially small and compartmented house a certain expansiveness and generosity. 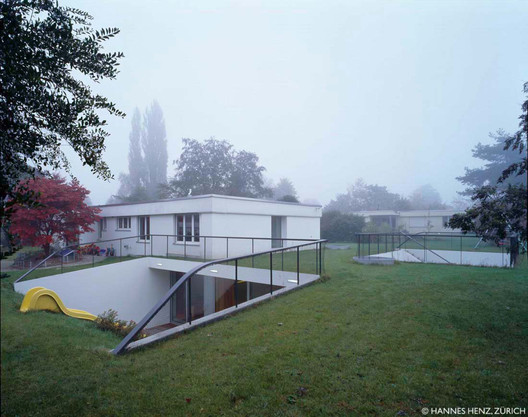