Save
Split View / U Architects 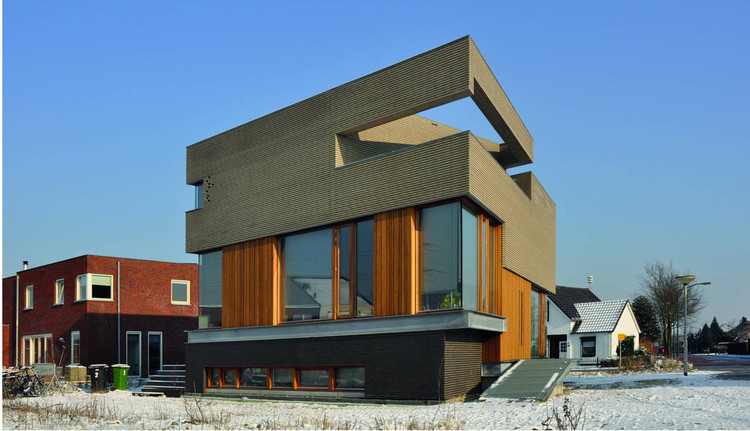 Text description provided by the architects. This family which wanted to build this house was motivated by the change of their living situation and wanted to express this also in their new house. The two children of this family wanted to have their own living surrounding but also wanted to be in close contact with the parents. On the other hand the parents wanted to have more private zones in the new house but also be in close contact with their children. Every floor of the house had to have an overview of the surrounding.

In a certain way the new house is a translation of the family situation which is undergoing a transformation like many other families in the Netherlands. The family wanted a house which is flooded with light, which is experienced each season in a different way and they wanted to experience the surrounding from different locations in the house. From the outside this house gives a readable split level. A glimpse of the various functions of the house can been seen at different corners from outside and inside the house.

For the term “split view” we could also use the term split mind, because the memory of the users of an average traditional house is at its best in traditional closed spaces (book of Joshua Foer). This theme mentioned in the book of Joshua Foer is as followed: If the person leaves the space where he has learned or read, the thought is easily forgotten by leaving the closed space and when the person returns to the same space, then this person remembers again the thought in question. Our mind/memory is categorized in rooms/spaces.

This house will be an interesting thought and behaviour experiment because here are various crossover and open connections between different spaces. We question ourselves which effect this split view house will have on the mind and the remembering of facts and thoughts of the users of this house and will it result in a split mind/memory which is a modern variant is of our modern time of remembering and acting in this rapidly changing and liquid society.

The staircase is made of wood (Yellow Poplar) and connects the several levels of the house. The house stands at the cross point of two roads. We proposed to lift the house up from their surrounding and to mark the different floors levels with steel beams which are also a reference to the road protection beams at the side to the roads in the Netherlands.

The other materials are the two colours bricks (lxbxh= 240x90x40 mm) mm strong horizontal deep lying cement and vertical wood elements with different size (Plato wood: special modified wood), and the steel beams are galvanized and marks the beginning of the split in the house.The bricks are specially made in the colour with certain amount clay. We try to find a balance in the facades and we try to express the split view theme at the outside.