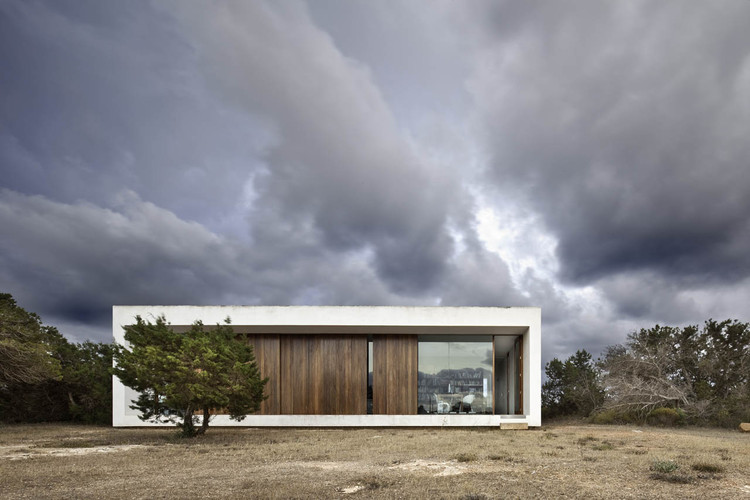 Es Pujol de s’Era is a fairly representative fragment of the inland landscape of the island of Formentera. It comprises 33,022 square metres of wheat and barley fields, a small wood of common and Phoenician juniper and rosemary, and dry‐stone walls on a practically flat topography. The intervention seeks refuge among the existing vegetation and a fragment of dry‐stone wall. These two conditions draw out the dimensions, the orientation and the height of a construction of austere geometry that bears some relation to the architectural tradition of Formentera.

A traditional dry‐stone wall establishes the alignment in the territory and becomes part of the northern elevation of the building, at the same time setting it in the landscape. An old chapel built over an underground water cistern marks out the building’s longitudinal axis and is a constant reference of dialogue/tension, both in the exterior and the interior. This is an architecture that seeks context by means of relations with its surroundings, shunning mimesis.

The north‐south orientation of the proposal generates a duality that was required by the programme and that the ground plan radically synthesizes: segregation of the more public activity from private life. The north side is the most exposed; it is clearly visible from kilometre 2.3 on the CamíVell de la Mola, the main approach route.

On the north side there is a small architecture studio, repeated on the south side in the form of a space of identical dimensions, designed as a small dwelling‐refuge for a couple. As well as seeking sunlight, the orientation of the refuge responds to the desire to appropriate the small wood of common and Phoenician juniper and rosemary that extends like a native garden, requiring no transformation or maintenance, and generates a high level of privacy.

Between the studio and the dwelling is a nucleus of services that separates work from private life: bookshelves, files, bath‐ room, kitchen, beds, cupboards, installations and two sliding walls to divide up the two main areas and create more intimate spaces, such as an annexed office or a guest room. This makes the house both flexible and multifunctional. The envelope containing the programme (12x12 m) extends in the two main directions, generating spaces of transition that are vital in these latitudes.

The volume is defined by an envelope of rendered thermo‐clay masonry and reinforced concrete. An extruded section represents the only part where masonry is used on the site. The other interior and exterior facings were dry assembled, using glass and iroko timber. A small setback around the edge in section creates the sensation that the building is floating over the site. This is the transition between an artificial world and the pre‐ existing organic environment.

The side openings are conceived as slashes that rend the façade from top to bottom, fragmenting the east and west elevations and giving them a smaller “grain”. With the idea of obtaining greater sobriety and harmony, the auxiliary elements and furnishings were specially designed, using the same materials employed for the dry‐as‐ sembled elements of internal division.