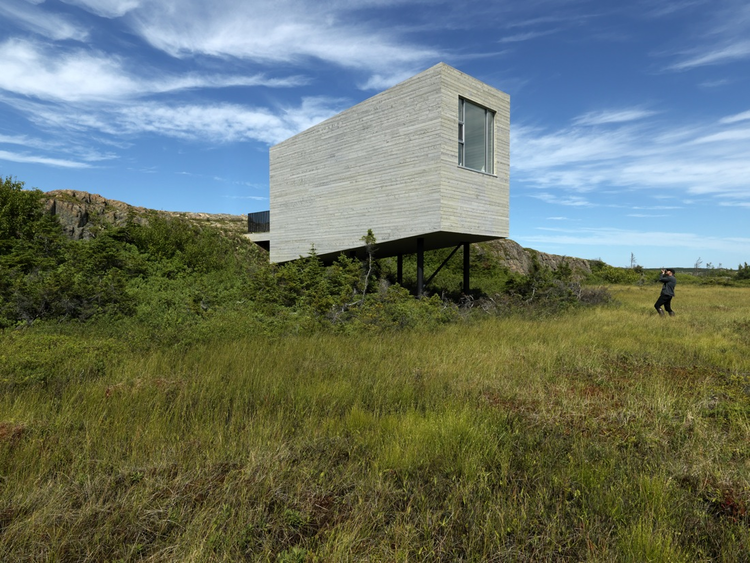 As with all the Fogo Island Arts Corporation’s Art Studios, Bridge Studio is paired with a tradi- tional Newfoundland Saltbox house, this one is located in Deep Bay, the smallest community on Fogo Island with a population of one hundred and fifty people.

The Bridge Studio’s Saltbox House is a freshly painted, in sharp contrast to its dilapidated condition, only a few months previous. A local carpenter who is putting the finishing touches on the house, points out the project’s double-hung, wood frame windows that were crafted at the local woodshop, initiated and operated by the Shorefast Foundation.

The trek to the Bridge Studio from the Deep Bay House looks short on a map. Of course, on the ground is a different matter as the topography enters the equation and one navigates the rocky landscape of the lichen clad granite outcroppings on this sublimely beautiful stretch of coastline leading to Bridge Studio, an art studio, completed in June 2011 by the Fogo Island Arts Corporation.

Along the winding path one encounters short runs of wooden stairs and ramps, installed in critical locations to help visitors ascend some of the trail’s steeper inclines. After walking about twenty minutes, the first sign of the Bridge Studio is an isolated solar panel (and battery enclosure) mounted on a hilltop to take full advantage of the Island’s limited sunshine. These solar cells generate electrical power for the near-by Bridge Studio, dramatically located on a steep hillside overlooking the calm waters of an inland pond.

The first impression of the Bridge Studio is its abstract quality. From the side elevation, it ap- pears as a windowless wood-clad parallelogram, hovering above the landscape, propped up by four piers and connected by a sixteen-foot bridge to the adjacent hillside. As one approaches the three hundred and twenty square foot studio, it becomes more transparent – with a generous glass entry and a large square window at the other end of the room.

Viewed from the glass entry, the ceiling from the entry slopes up to the top of a large picture window at the opposite end of the room. The picture window’s sill is flush with a built-in desk, the perfect place to write and contemplate the view. To mirror the sloped ceiling, the floor of the Bridge Studio is composed of two levels.

The lower area, that accommodates an entry area, long counter and wood-burning stove is divided from the upper area by a short run of stairs. From the entry, the perspectival aspect of the project is augmented by alignment of the four-inch painted spruce planks that line the ceiling, the walls and floor.

From the aerial photographs, the isolation of the Bridge Studio becomes apparent, a highly restrained, slightly distorted, elongated box sited on an outcropping of rock, overlooking a sheltered pond of water. The form, although resolutely contemporary recalls a traditional Newfoundland fishing stage (in the local nomenclature) a wooden vernacular building, typical of traditional buildings associated with the cod fishery in the province.

It was in these fishing stages, equipped with cutting tables, that fishermen would clean and salt the once plentiful codfish that was distributed worldwide. It is an interesting twist that the Bridge Studio echoes this vernacular form, once a typical sighting in any Newfoundland outport. The fishing stage and the cod give way to the studio and the production of art. The Fogo Island Arts Corporation creating an opportunity for a ros- ter of accomplished artists to generate works of art that in turn enrich the international scene of contemporary art. 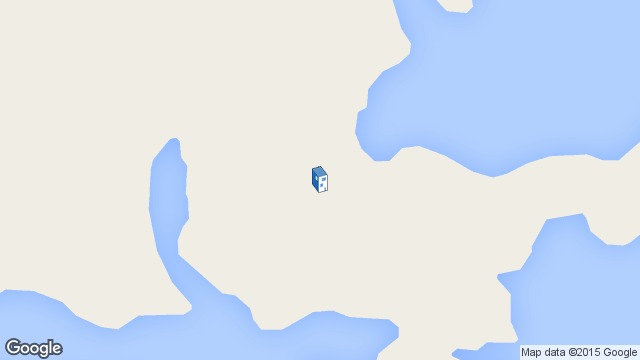