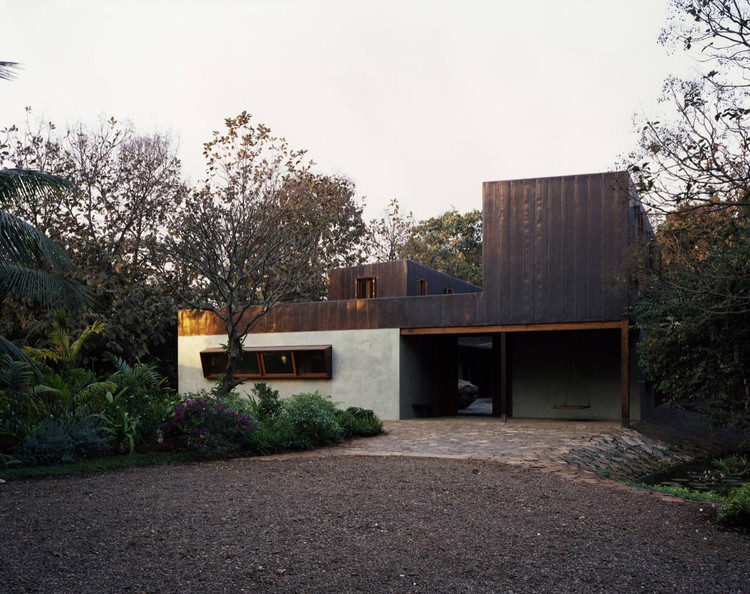 Text description provided by the architects. The hortus conclusus unites within itself a marvellous assemblage of disparate aspects. It seeks to understand the landscape it denies, explain the world it excludes, bring in the nature it fears and summarise all this in an architectural composition.

The severe flood of Mumbai and its hinterland in 2005 had marked its high-water mark on a pump-house that was extant to the site. Aftet using it to register the datum for the house, pile foundations were put in and a slab was cast two feet above the high-water line. The central fill came from the excavation for the well, and around a court, the house grew.

The language and logic of the building are located in three primary architectural moves. The first is the creation of two distinct blocks, varying in width by a foot, separated by the stone-paved courtyard on the ground, and united by the cupric roof plane at the upper level. The two blocks function as discrete personal spaces on the upper level, one is a singular space of bedroom and bath, the other has an additional study.

At the ground level, an indoor family room becomes an adjunct to the main living space which does not have the containment that the other more private spaces exhibit. This main space functions literally as the deck of the house, overlooking the landscape and the courtyard, creating a simultaneity of vistas, each of a different scale and access. The copper-covered private spaces at the upper level are positioned in mutual tension, with the guarantee of simultaneous intimacy and isolation, so essential to the domestic interior.

This spatial strategy also allows for varying levels of communication, visual and otherwise, between the upper and lower spaces of the house. In Kerala, further south from Mumbai along the west coast of the Indian peninsula (as in many other regions), the courtyard was the center of the traditional house.

The central room formed by the courtyard flanked by pillars was called the naalukettu. But the entire structure, comprising the central hall and the four wings around was also commonly referred to as the naalukettu. This reference to the courtyard as the house itself, holds a clue to the development of the design for this house, as it evolved from being an embracing structure, to one which opened out.

The second definitive move is the layering of light through a series of material gestures, each one tuned to the direction that light takes and the need for changing degrees of privacy. This is articulated with screening devices made of fine netting framed in traditionally crafted wood, fluted glass which diffuses the light and greenery and hints at the absent city, and sliding and folding wooden windows, all of which allow for degrees of seclusion.

The walls are finished in a celadon-coloured traditional plaster, smooth like human skin, and crackled like the ancient Chinese glaze, giving the transitory appearance of a fragmented ceramic container, rectilinear and encased with a lid of weathered copper. The continuous copper roof plane forms a secondary datum for the house, becoming a surface of potential occupation and cover.

The last is the inclusion of the element of water, whether in the form of the monsoon rain which is relentless in its action on material and mood, or in the form of the well, the stream and the pool beyond the house. The seasonal ‘anxiety’ of the ground is addressed in the manner in which the paving is worked out within the courtyard in a continuous linear fashion and in a loose ring around the house, with undulations registering the flow of rainwater as it reaches for the nearest point of exit.

The entrance portal of the building is a non-place. Sitting beneath the first upper copper-wrapped container, it becomes a space of pause. In this house, with its hortus conclusus acting both as container and sieve, the exploration of the rites of retreat, passage and exclusion are tested again. The final gesture was housing the massive rock which came as a gift from the owner’s mother, leaving it for time to take over, as time inevitably will. 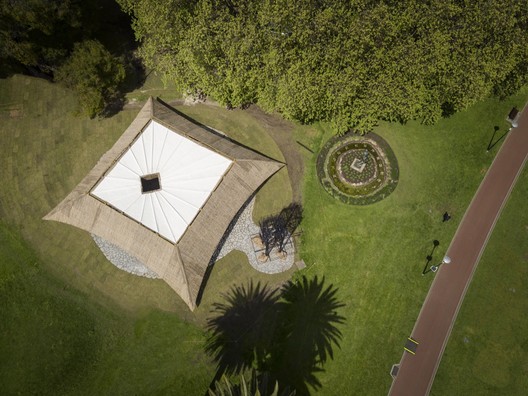 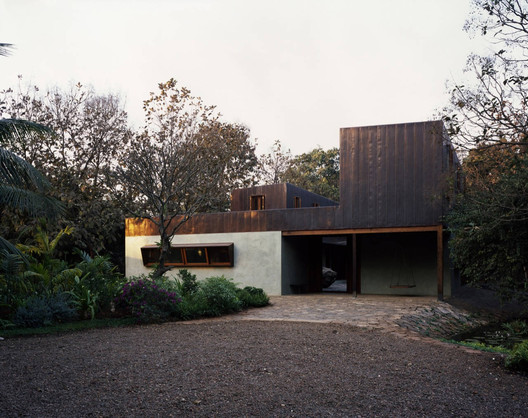