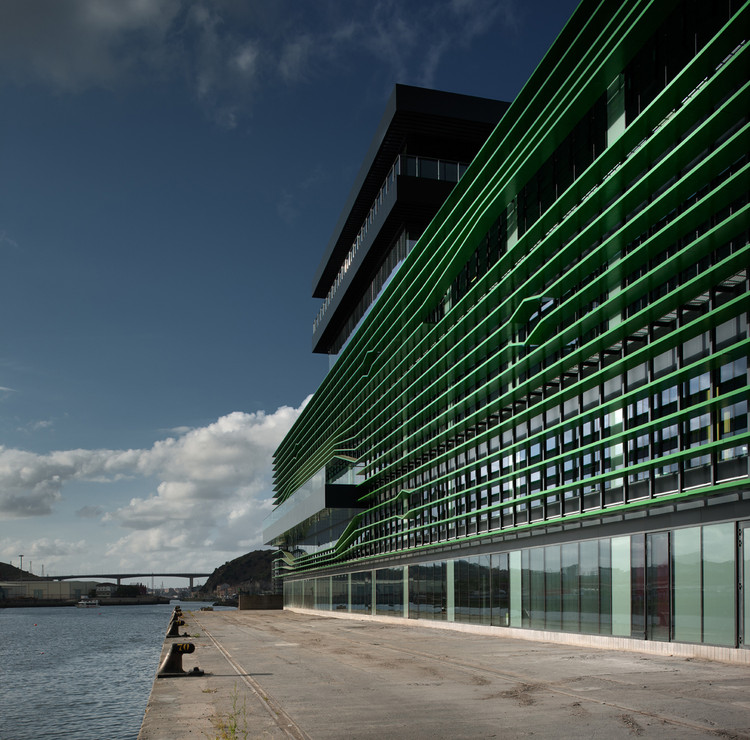 Text description provided by the architects. The new IDOM Group offices are located in the old bonded warehouse in the Deusto canal, in Bilbao. It has 14,400m2 destined for offices, research and development areas such as the white-room and the prototypes workshop, and social spaces.

Outwardly, and from the first idea, the design has developed from the occupation manner of the roof, which was filled with goods that were stored in the building. An imaginary green carpet has been designed as if simply placed over the roof, hiding all air conditioning units which in most office buildings are visible, with the resulting sound and visual impact. Certain topography arises as a result of the adaptation of the "carpet" on the machines. Folds and surfaces that resemble a hill on which to stroll in the moments of relaxation and conversation with peers for this is the floor on which the rest-area of the building is planned. The flat part of the "carpet" is natural grass. For maintenance and weight reasons, the part that covers machinery, the folded one, is artificial turf.

We wanted to give the façades a design which was highly protective of the sun but that did not compromise the view from the inside and that would help us control solar radiation and thus energy expenditure. So we turned to some “brise soleil” whose design emerges as an imaginary extension of the roof carpet as something that has been stretched over the façades and "folds" in its singularities: an existing balcony facing the canal, the entrance, access points for firemen through the façade and other unique areas. During the design process we developed several designs. Finally we settled for a horizontal solution which had the optimal balance of aesthetics, cost and maintenance: extruded aluminium profiles supported by HEA steel profiles with AISI 316 stainless steel screws. The building envelope is solved with aluminium composite and rock wool in the blind parts and with high performance glass in an aluminium framed curtain wall in the spaces between pillars. Between the slat rails and the façade, a platform for external cleaning of the glass has been designed.

Inside, the design combines existing elements with new ones. The great beams of the original structure (a port warehouse) are left uncovered in most of the floors. The openings used by the old car-lifts that lifted cargo up to the roof are now occupied by a splendid main staircase and glass covered lifts that will offer views of both the offices and the canal. On the top floor of the tower, where the noisy machinery of the car-lifts used to be enclosed, there is now a library, a space for ideas to flow in silence.

On the ground floor, it was necessary to eliminate 3 pillars to accommodate a 400 m2 exhibition hall. Three discharge frames, having great height in the middle, determine the design of the room: a continuous wood covering over floors, walls and ceilings, which adapts to the shape of the discharge beams through a geometry of sea echoes, like the hull of a boat.

The building has innovative energy efficiency measures: very low consumption taps and sanitary equipment; rainwater storage tanks on the roof, under the grass, for the automatic watering of the garden; automatic lighting regulation systems, sun protection slats on façade, photovoltaic panels on the roof of the tower and unique diffusion by movement and HVAC by water systems. For the latter, different coloured beams that round up the HVAC and lighting in a single element have been designed and installed: the cold beams. It is estimated that these measures will bring about energy savings of nearly 60%, compared to the normal consumption of a similar building.

The green roof provides a number of additional benefits that affect the nearby urban environment such as the reduction of the heat island effect, acting as a noise and CO2 absorption element thanks to its vegetation. Also, the possibility of retaining water that, accumulated in a run-off water tank on the ground floor, contributes to the control of water in times of storm or heavy rains.

The cold beams integrate water batteries, lamps and lighting sensors and are installed between the existing large beams, which, due to the fact that they are uncovered, make the most of their inertia given by their great mass to mitigate temperature differences between day and night, when the HVAC system is off or on. The HVAC works with the water that feeds the batteries with no mechanical parts. It helps to create an effective and durable system, requiring minimal maintenance. The diffusion system for ventilation is displacement by which the air comes out from the ground, at very low speed, and rises, as it warms up, towards the ceiling where it comes in contact with the batteries and then descends by natural convection. A draft-free installation, very comfortable and quiet.

The colour of the beams contributes to making the workspace friendlier, away from the usual monochromatic ceilings in the open office spaces, and closer to the chromatic vibration of greens and ochre colours that are seen when sitting under a tree.

On the perimeter of the building, the façade adjacent areas, in order to tone down the excess of natural light, walls and ceilings have been painted anthracite grey. The interior has been left stained white colour, the colour that the existing structure had, which is left raw, uncovered.

An important objective of the project was to create a large and airy workspace, with great visual communication between and within departments, without barriers between different levels of function and membership of the IDOM firm. In the centre of the floors, a lobby serves in some cases to establish a zone of secretaries and in others, seating area to talk on the phone without disturbing other colleagues.

Very few offices haven been planned, yet many meeting and teamwork rooms. To avoid creating psychological barriers between the office rooms and the open areas, we planned no conventional partitions with a fixed glass and door, but rather three-pane-glass sliding screens that allow for 2/3 of the office front to be open towards the work area.

Noise and open workspaces are often synonyms, so we paid special attention to sound absorption surfaces: on the floor, a carpet with state of the art 6.6 fibres; on the front of the tables, perforated plates with rock wool and in ceilings, the cold beams have a lining designed with a sound-absorbing veil and perforated plates so that their position between the existing beams serves as an acoustic trap.

This strategy is repeated in the visitor rooms, where we designed a rock wool wall cladding, absorbing veil and electro galvanized dichromate perforated plates, an industrial finish used to make filters and sieves.

The floor of the basement, which the building didn’t have before, is below the low tide level of the Deusto canal. To ensure adequate ventilation some walls, and to minimize filtration and dampness problems, the pillars – foundations are covered with camouflage mesh. 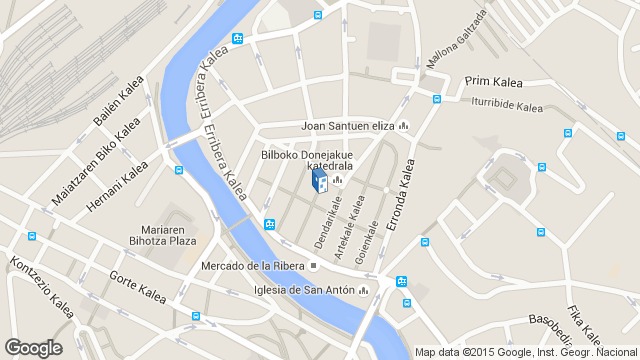 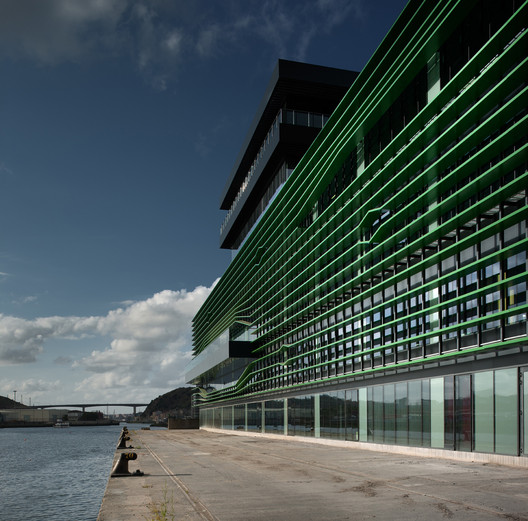