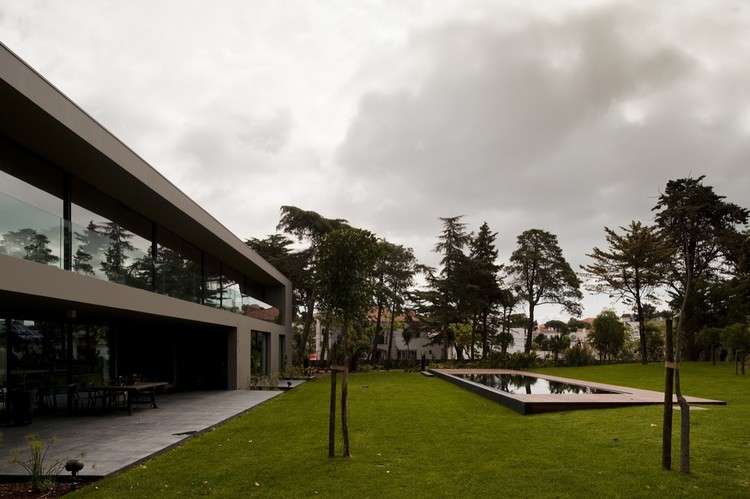 Text description provided by the architects. Included in Estoril’s residential neighborhood, in a low density urban area, the House stands discreetly in a plot where the green predominates. Natural and artificial live here together as a mutual extension of each other, accomplices in establishing a spatiality which is intended to be active in the characterization of its surroundings.

Through simplicity, and taking as a premise the redevelopment and rehabilitation of an existing house, the intervention tries to overcome the irregularity of its original form. Thus, massive volumes that are subtracted from each other promote a monolithic image, on which the controlled choice of materials intended to enhance the shape as "whole”.

Inside, the adaptation of existing spaces for the new housing program aims to reveal a clear fusion of the social realm, more exposed, and the service area, which appears in the continuity of this zone to a more protected area in the backyard.

The main entrance is on the north-side, in the continuity of the garden, and opens onto another garden, immediately to the south. Between the two gardens, follows a sequence of interconnected spaces, whose rhythm is disclosed, inside and out, by the lack of visual obstacles.

The circulation space, seen as a void, pierces the intervention and makes the distribution between the access to upper floor through a dematerialized stairway, the service areas (cloakroom and toilet) and the social zone, which comprises the hall, the office / library, the living room, the dining room and the kitchen. The organization of the intimate area of the house, located on the upper level, plans to make the most of natural lighting, through the opening of large windows and the creation of courtyards.

It is planned that the lack of typological and formal commitment between the parts that make up the whole acts as a catalyst for a dynamics, promoting the flexibility of spaces and ensuring, at the same time, the well-being and the response to the demands of those who benefit directly from them. 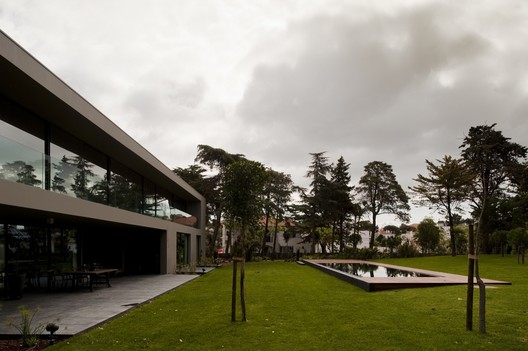