The American Institute of Architects Pennsylvania Chapter has awarded a Silver Medal, the institute’s highest honor, to Spillman Farmer Architects for their highly successful ArtsQuest Center at SteelStacks. Located on the landmark Bethlehem Steel site in eastern Pennsylvania, the dynamic performing arts, media and cultural center has served as an anchor for the revitalization effort in the City of Bethlehem that is transforming the once-abandoned historic industrial core into a dynamic, sustainable and livable mixed-use community. The 200-foot industrial ruins towering above the ArtsQuest Center is part of the country’s largest privately-owned brownfield.

AIA jurors praised the project saying, “The design captures the energy and utilitarian beauty that the best of the industrial revolution once offered. At the same time it demonstrates the power that a truly successful marriage of architecture and program can exert in bringing new purpose and hope to the most abandoned parts of our community.”

Continue reading after the break for more information and images. 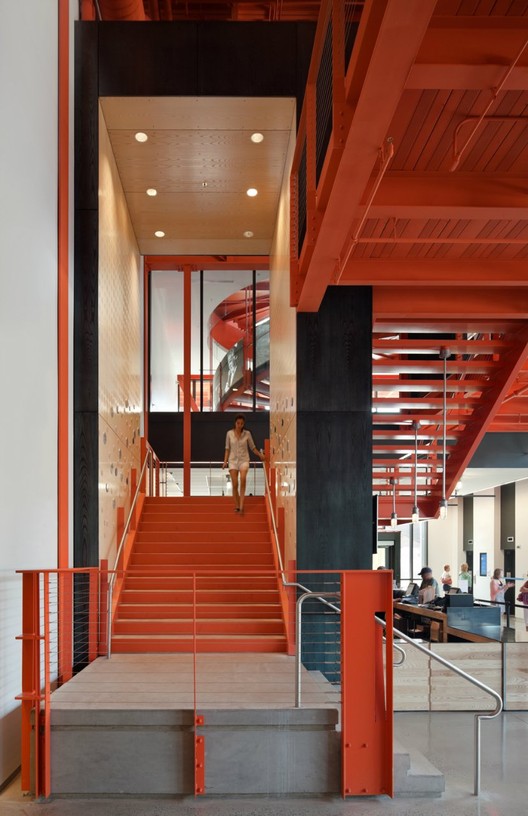 Design Principal Joseph N. Biondo responded, saying, “The architecture of the ArtsQuest Center is influenced by its industrial site. It embraces our region and its culture, recognizing the material and human spirit that fueled the industry of this country. It is an honor to be recognized by the AIA for our dedication to craft and human-centered design,” Biondo continued, “As a firm, we see this project as an expression of structure, material, and site.”

The 68,000 square-foot building is wrapped with locally-manufactured pre-cast concrete panels, which are mounted with their rough, hand-screed surface facing outward. The Center’s panels celebrate both the process and the people that produced them, by revealing the marks of their production. Inserted within this structural concrete strongbox is a skeletal steel frame that honors the site’s steelmaking history, taking in consideration that Bethlehem Steel Corporation was one of the most powerful companies of the Industrial Revolution. Additionally, the skeleton is finished in International Orange, an iconic color borrowed from many of Bethlehem Steel’s most recognizable fabrication projects, including the Golden Gate Bridge.

The Center continues to be home to over 300 live performances yearly. With such a vibrant performance schedule and a continued community presence, the ArtsQuest Center has become the cultural incubator of a region that is reinventing itself for the post-industrial age.

As this project has been previously published on ArchDaily, follow these links to review the ArtsQuest Center at SteelStacks completed project and schematic design in greater detail.

The ArtsQuest Center was photographed by Paul Warchol Photography.