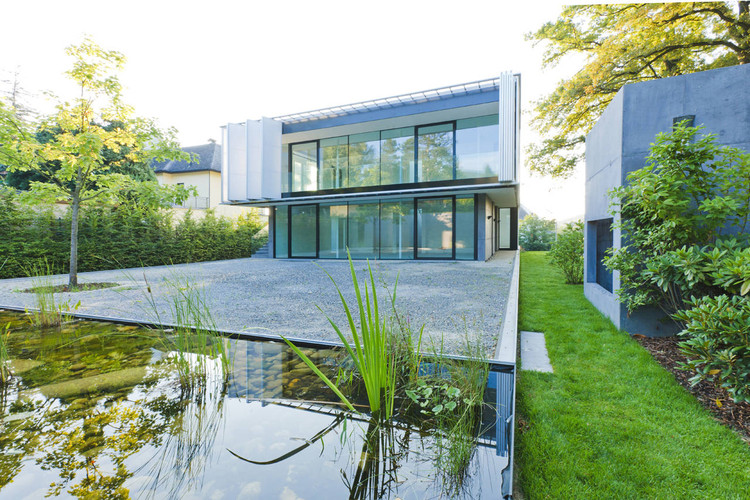 The project is located in the suburb of Hietzingof Vienna at the edge of the Vienna Forest. The site occupies a 1,400m2 corner plot in a street of detached villasin large gardens. The southern side is defined by a small creek and three mature, protected oak trees located on the neighbouring plot, casting a very particular atmosphere onto the property.

The scheme aims at accommodating and negotiating the differing and ever changing needs of an extended family. From the one side the complex requirements of the brief with four different programmes; two independent family units, a studio for a performing artist and a guests’ unit and from the other, the constraints given by the local planning department on massing and footprint defined the volume and the outline of the building.

The building is an urban villa with an austere three storey presence to the street while the rear of the building is a variously negotiated two storey volume extending towards the garden. The topography of the garden was recast through a series of platforms organising and catering for the various clients’ requirements for outdoor living.

Materially, these specificities translated into a terraced black concrete base and a two storey volume upon it, envel-oped with fixed and movable white translucent Teflon panels. The fabric cladding was conceived as a reference to the material quality and texture of the lost Bohemian tradition of linens and domesticity, allowing for the powerful presence of the oak trees to enter the interior in the form of a playful game of shadows on the large canvases.

The entry to the building from the street is via an alcove, providing security and semi-privacy. This niche leads to a generous, skylight staircase which becomes the gallery of the villa and the core of each home around which all rooms are arranged. In response to the brief, two generous living areas of different sizes and acoustic qualities open to-wards the garden and are designed to cater for music events and social gatherings of various scales. The ‘garden’ apartment relates to and has levelled access to a clearly defined paved patio with an oak tree, a reflective pool and an outdoor fireplace. The ‘upper’ apartment enjoys views towards the Vienna Forest beyond the upper garden and orchard to which it has direct, private access. All private areas have a relaxed definition of the use of rooms which gave a flexible character to the building’s interior.

The environmental and energy concept was carefully developed from the outset along with the building design, thus the building meets the highest building performance and energy standards despite its large glazed surfaces and its translucent enclosure. On the one hand, particular attention was paid to strategically use consciously sourced or recycled materials. On the other, the energy concept was devised through careful application of high performance materials and smart technologies, such as glazing systems, adequate thermal insulation in com-bination with solid core thermal mass and following bioclimatic principals such as self shading.

This stands in combi-nation with an efficient heating and cooling system based on a geothermic heat pump with heating coils integrated in the structural concrete elements of the building and an under floor heating system. With the provision for photovoltaic cells on the flat roof surface, the building will be further upgraded to run entirely as self-autonomous energetically and with the possibility to produce an energy surplus.