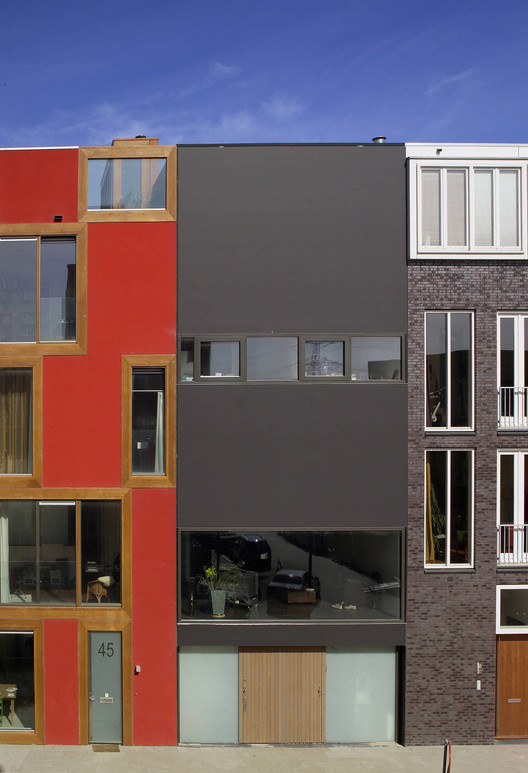 In contrast to the surrounding multi-coloured diversity, diederendirrix designed the front facade of the Stiegerland house as a black hole. The closed frontage is made of black painted concrete and a noticeable deviation to this is the opaque glass and wooden front doors on the ground floor. Colour is barely used in the interior, the only exception being the bright red walls of the patio on the roof. Because only two of the five storeys can be seen from the front elevation, the spatial layout of the house is concealed.

The kitchen and dining room, both located on the garden side of the ground floor, are invisible from the street. Behind the large window on the first floor is a four metre high living room and above this, behind the strip window in the front facade, is the first bedroom storey. The second bedroom storey and the roof terrace are again hidden from view. Inside the house the split-level interior generates taller rooms on the ground and first floor and accentuates the length of a relatively compact living room. Steigerland house was nominated for the Gouden AAP (Amsterdams Architecture Prize) 2008.

In the IJburg district, the Steigereiland is a ‘free’ zone where private individuals could realize a house of their own liking, with few restrictions except the obligation not to exceed the construction line or the established building height. This row house is such a house. In contrast with the gay diversity around it, the facade of the house has been conceived as a black hole. The mostly closed facade is constructed out of concrete, which has been painted black. The opal glass and the wooden front doors are the only exceptions.

Inside, hardly any colour has been used either, with the exception of the walls of the patio on the roof, which have a touch of the red of the neighbours’ facade. Besides the ground floor, only two of the five floors reveal themselves in the facade; the house conceals its spatial composition. Behind the large window on the first floor is the four-metre-high living room.

The kitchen and dining room are on the ground floor at the garden side and not visible from the street. Above the living room, behind a ribbon window in the facade, is a floor for sleeping; above that is a second floor for sleeping and also a roof terrace, both oriented towards the south and again hidden from view. Inside the house, the split-level design results in high rooms on the ground and first floors and places an emphasis on length in the relatively compact living room.