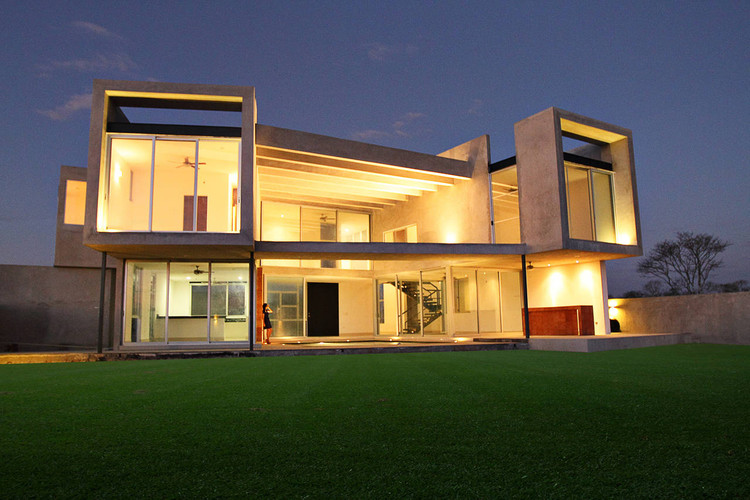 Text description provided by the architects. The Fi house is a dwelling situated in a low density residential zone in a village on the outskirts of the city of Mérida. The house is placed in a flat lot, with no vegetation in their limits, with the chance of maximize the external view.

The architectural program comes from different conditions and will of the client. As a special request, the house should take advantage of the natural sunlight and the prevailing winds. Also, the house should be developed around the swimming pool, always in touch with the garden through the sights.

Being the pool the “heart” of the house, all the spaces are around it, perfectly linked through the big windows, that when they’re opened, the living room, the hall, the dining room, kitchen and terraces are merged in one. The scheme, around the central yard, is open as a “V” to the north and east, catching all the winds of the region to cross the entire house continuously.

Southwards, the façade is shown a little more covered, with windows that allowed the ventilation, but in smaller size to filter the sunlight from the hot weather where the house is found. Upstairs is designed to follow the two wings of the geometry downstairs; one is for the master bedroom, and the other, the kid’s room and a guest room. Both elements are linked direction south with the TV room. Northward,a free bridge connects the master bedroom with the kid’s room. Serving as a viewer and framing the visuals of the TV room.

The purpose of the volumetry of the rooms is to maximize the view of the distant nature, opening both rooms to the outside, giving to them the sensation of closeness. Finally, the double height of the internal patio is covered with a concrete pergola. 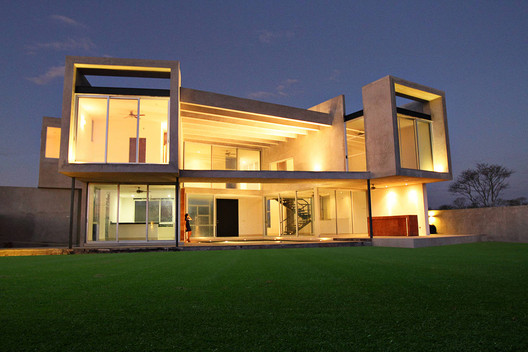