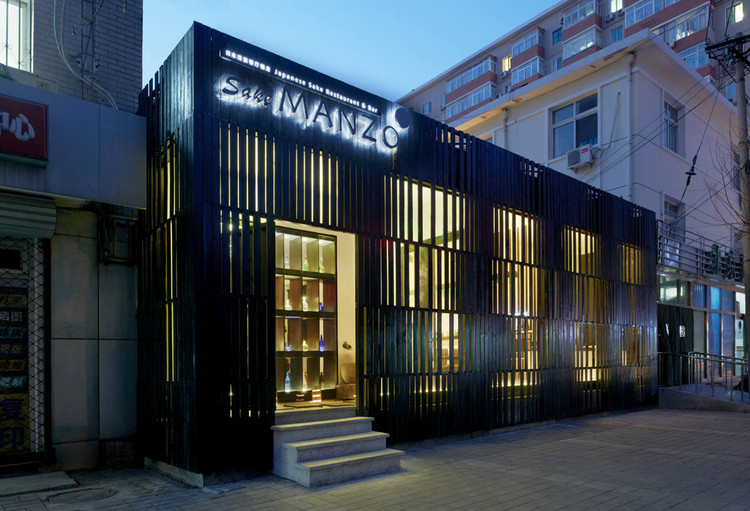 Text description provided by the architects. The site is located in a residential area, adjacent to theeast side of Beijing Third Ring Road. This is a renovation project of an old building made into a Japanese restaurant. As Manzo Bar (designed by BMA 2005)was to move, BMA was requested to design the interior space again. In April 2011, the project started from demolishing the interior decoration of the former Chinese restaurant with a floor area of 380sq.m. Having exposed the existing building frame to check the structure and the equipments, we worked ondesign in parallel with construction and restoration, andcompleted in September 2011.

Since the client had the concept of "Convey Japanese Sake Culture to China", Sake-bottle is used as a design motif. The light fixtures in the main hall are made of Sake-bottles. Also, numbers of Sake-bottles are exhibited on the shelves in each room. The exterior is refurbished with wood louver. Through the gaps between each louver, the interior space can be seen from the street. This louver facade helps conveying the lively atmosphere to the outside, while keeping the interior space comfortably hidden.

With the long narrow building shape, another issue was how to attract customer's attention to the inside. For this reason, we created a courtyard by removing a part of the roof in the center of the building.In the courtyard, new openingsare made on the wall in order for customers to see the garden from the main hall. In addition, theceiling of the corridor running from the main hall to the back-end is characterized by the weathering galvanized steel arch, which is also meant to attract customer’s attention to the spaces in the back.

In the main hall, the panels of Chinese antique partitions which were abandoned in the former Chinese restaurant arenow laid on the counter top like a patchwork. Such old-fashioned materials are contemporized in this manner. Many of the light fixtures are custom-made, such as “Sake-cup lamp” at the entrance, and “cloud lantern” in the private rooms which is made by a Chinese lantern manufacturer. There are many varieties of Chinese craftsmanship integrated together in this restaurant. 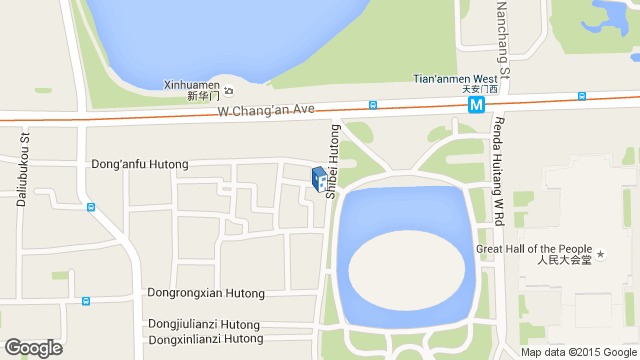