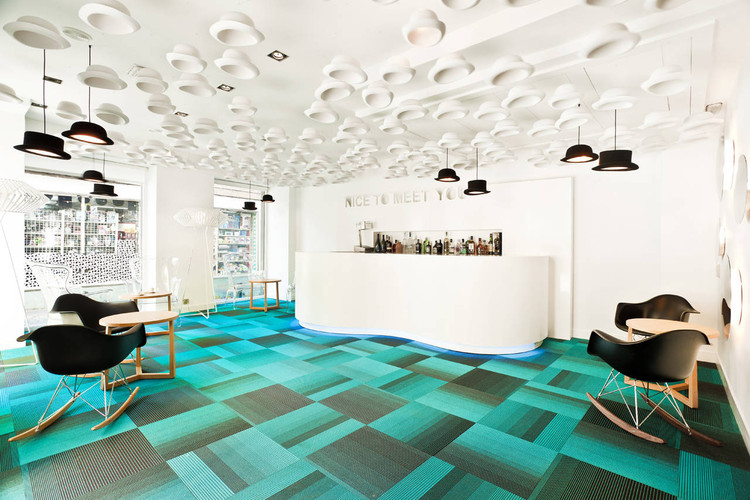 Text description provided by the architects. A cry of colour

In the centre of Granada, in the characteristic district of Realejo, we come across a hotel with a unique style: Portago Urban, the second one of the Global Suites chain. Located in an ancient building, it has already been used as hotel before being totally reorganized in 2011. The hotel is divided in such a way: ground floor, where we find the common areas such as reception, coffee bar and breakfast room; three floors, where 25 bedrooms and a wonderful platform with a special view are located.

As we notice from the name, it has a strong urban personality. The space draws heavily on the figure of a typical English gentlemen, mixing this kind of style with the informal and colourful environment peculiar to this central district of Granada. It is characterized by an informal and amusing aesthetics which welcomes and accompanies the visitor for his whole stay.

Entering the hotel we are welcomed by a distinctive ceiling. The bowler is not a simple hat any more; it becomes an element that, being used thousands of times in an unpredictable way and at different heights, creates a moving and wrapping surface. A second level is created by the hat floating in the air and by continuous projections of lights and shadows which give life to a dynamic image of the hotel entrance.

This area, which is visible from the outside, is the hotel coffee bar. This is the first space that the visitor comes across. So it becomes even more accessible for those who want to stop and take a drink. It has been thought to be an idle meeting place of the city where people can spend some time with their friends.

In addition to the characteristic ceiling described before, we run into an intense turquoise coloured floor. In the whole hotel, the floor is a huge coloured surface with a strong intensity, which changes shade in the different areas. There is a willing contrast between the white space and the strongly coloured ground. As a cry in an empty space. This is obtained by the optical break between the floor and the rest. Using a highly coloured floor, it is possible to see better the white surface, whether removing the colour from the walls and ceiling, it shows up the plastic force of the floor.

A cry of colour…

In order to reach this result, an Interface FLOR branded carpet has been chosen. It allows a perfect maintenance and presents a wide choice of colours. The whole floor of the hotel, both public and private areas, is realized using this material.

A huge monolithic curved counter made of white corian dominates the space; on the wall behind it there a message is communicated: “nice to meet you”. Then, we run into the reception area, where the visitor gets rid of his luggage, which is represented by a decorative detail made of old piled up suitcases.

After that, we find the breakfast room, which is located in the lower part of an inner covered patio. All the rooms overlook this inner courtyard making this area visible from everywhere. In order to make it seem more welcoming, ILMIODESIGN has created some huge cylindrical lamps made of strong coloured lycra which minimize the height of the area. Walls have natural wood finishes on which appliques are located, which look like an enlighten sun.

There are three types of rooms. They are customized through the use of different colours of the carpet, different graphics and friendly phrases carved in the headboards. They invite us to relax and enjoy our stay.

A platform, situated on the top of the building, will open on April 2012. It is directly connected through a lift to the coffee bar; as its prolongation, it has been thought to offer a place where it is possible to relax delighted by the view of a peculiar city like Granada.

This is a hotel that, for its aesthetic made of attractive ideas which are the same time economically feasible, doesn’t leave its visitor indifferent. The project is a global answer to the era in which we live, to a reduced economy and an always more growing need for innovation. 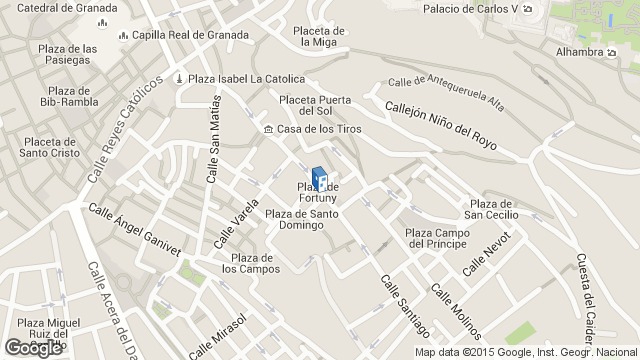