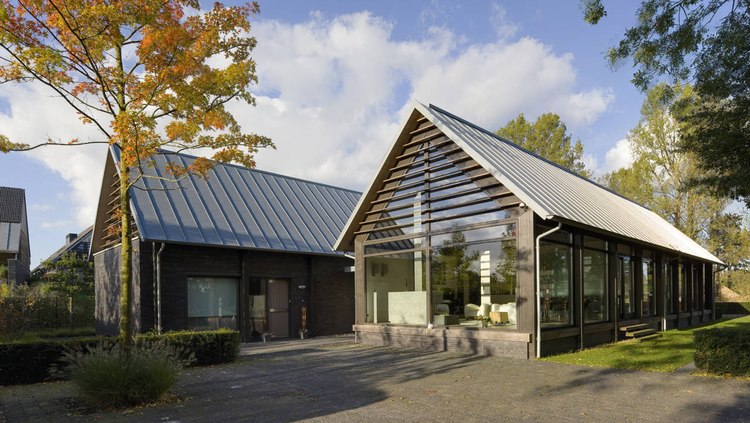 Text description provided by the architects. Due to the demolition of several old sheds a unique plot became vacant in Oud-Empel. Oud-Empel is a small village situated along side embankment of the river Maas. The dike divides the village in two parts: the unsafe waterfront where the smaller labourers cottages are situated and a protected side with the large farms and small factories and where the notables lived.

With respect to this historical setting four new volumes are scattered loosely on the protected location. The volumes make a characteristic historical composition of a farmyard with a large brick house with barns. But instead a agricultural function this barnyard has a residential function.

Like in other local farmyards the brick main house is directly related to the street, marking the entrance of the village. The floor plan of this house is based on a classical dwelling, consisting of a centralised entrance, a great hall and majestic stairs. Two large chimneys affirm the image of a grand house.

A yard is placed aside the house and gives access to the barn volumes, forms a intermediate between the village and the barn houses. One barn is facing the street while the other is parallel to the street and slightly sunken into the slope of the dike.

The fourth volume is located at the foot of dike, invisible from the main road. This house exists of two smaller volumes: a more closed volume which houses the private functions such as sleeping and bathing and one extrovert glass volume which contains the living area and the kitchen. Whereas the brick main house is more exuberant considering its materials, the barns are sober in terms of aesthetics and have a subtle modern use and detailing of historical materials.

The volumes are characterized by large roof surfaces, low gutters and moderate heights. Traditional wooden trusses provide large open spaces in the interior and at the same time show a modern interpretation of a historical building. This contemporary farmyard forms a new but recognizable archetype, linking the 21st century to this historical village.