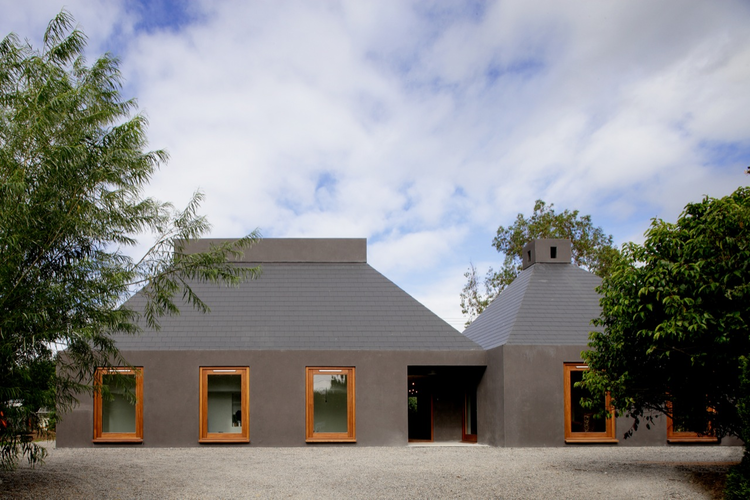 Text description provided by the architects. In August 2008 a 1980s family home in rural county Kildare lay submerged under 1m of water during three separate, unprecedented flash floods. The family devestated by the loss of their home saw the opportunity in rebuilding, to remodel the house while making it safe from possible future floods.

The project is a contemporary interpretation of an Irish Bungalow, answering issues of context, planning and site levels. Three blocks sit on the site connected through an interlocking knuckle hall linking the uses of living, kitchen/dining and sleeping. The ‘light chimneys’ direct light deep into these spaces leaving an ecclesiastic glow in the space and act as mini stacks for natural ventilation of the spaces.

Additional floor area and natural light were primary drivers for the scheme, as the previous house had been dominated by a long and eternally dark corridor surrounded by a series of box rooms. The project uses both direct and borrowed light from the light funnels. The two-storey Sleeping block is a tanked part-basement polished white concrete floor built on the existing slab, a void punched through the floor above brings light to the new hall below. The rooms are lit by tilting/pivoting/swinging large format hardwood windows and doors using a modular size of 2.25m x 1.5m throughout.

The upper floor is supported on a cranked beam giving additional height to the first floor rooms without overly raising the ridge level and retaining the appearance of bungalow externally. The crank in the beam returns space to the lower level bedrooms enabling the larger format windows to pull in more light at this level. The entire first floor level is lit by the large light chimney, providing direct and borrowed light to the bedrooms and study by use of internal roof lights, screens and voids.

The living spaces in the front block can be combined by folding back two large triangular flush screens, 1.5m x 4.5m, leaving the central chimney in the round. The kitchen/dining block is an addition to the original footprint providing an 8m x 8m square floor with pulled-in slider and overhang forming a porch between the adjoining utility and back garden. Light falls from above via the off-centre light funnel.