Save
CN House / Plus Line Design 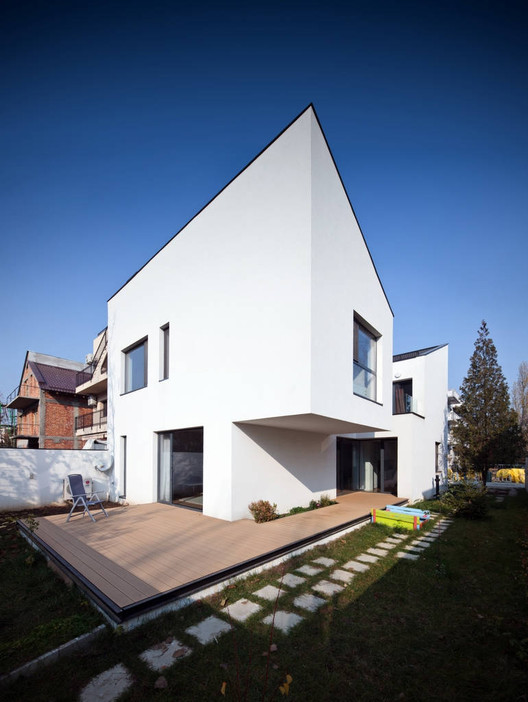 Text description provided by the architects. This house is built on a 450 square meters lot, located on a former park in Bucharest. In order to preserve the rich vegetation of the park, as well as the general ambiance of the area, the architect and the beneficiary agreed to keep the highest possible number of the existing trees. As a result, three out of the four trees survived. They also determined the placing of the building, becoming determining factors, just like the general urban provisions.

According to the zoning planning, the building was a semidetached house attached on the East side. Combining the beneficiary's desire to have a tiles wrapped wooden frame with the idea of having modern lines, led to three slopes roof concept, descending inwardly to a narrow area of a hidden gutter. This approach was acceptable to everyone, while creating generous and spectacular spaces on the second floor, where the indoors ceiling followed the oblique lines of the roof.

An attractive element, which provides the flow between the two levels is the central placing of the interior stairs in the open space, with plenty of natural light on the first, and especially on the second floor. (large roof windows) The hallway of the second floor gains functionality as an adequate playing area for children.

The first floor has the same exceptional flow: the see-through fence and the empty spaces allow unrestricted view from one end of the property to the other. The high level of trust and partnership between the architect, client and constructor (builder) was reflected in the cost effectiveness of the investment. Specifically, the efficient use of the under average priced materials replaced more expensive solutions.

The exposed concrete ceiling of the living room, the use of stained glass in the bathrooms, the attachment of the glass railing of the interior stairs by the edge of the concrete slab, the custom furniture, concealed and blended by the wall paint, the open spaces, with natural light are all available solutions, which once approved bring forth their strengths, giving an unique flavor to the color elements.

A pleasant surprise was the fact that these characteristics were preserved during the next year, in which a young family with two children and the two grandparents lived in it. It is generally expected that within the first year of use (the time period between the finishing of the construction and the photo session) the home owners to add items that express their personality and functionality. That was not the case. After a full year of use, the house looked like a newly constructed building, except few toys in the playing area, which only added a fun touch.