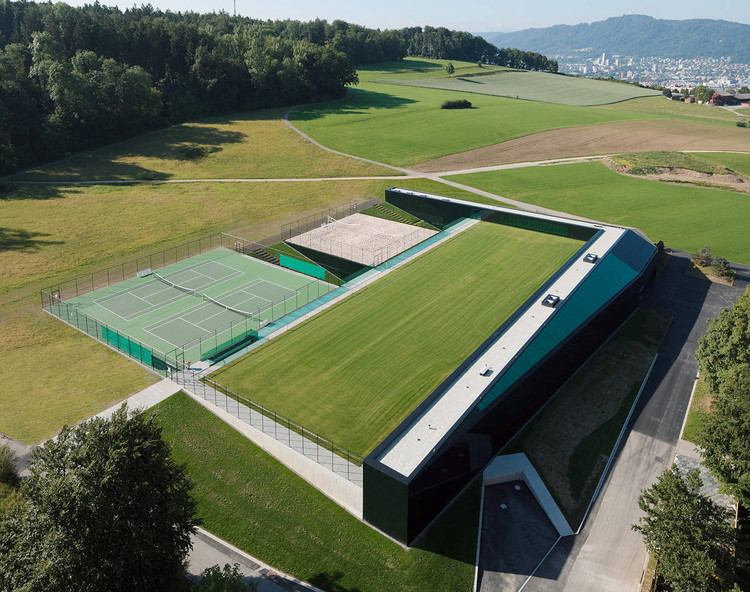 The campus of the Eidgenössische Technische Hochschule (ETH) (Swiss Federal Institute of Technology in Hönggerberg/ Zurich is currently undergoing energetic expansion. New additions will be a sport facility on the east side of the property, adjacent to the recreational area of Käferberg. The structure interprets the landscape and has been inserted into a sloping site with a hayfield; only its west façade becomes visible. The outdoor space appears to flow through the generous foyer along a green ramp back into the open. Appealing interiors create an inviting atmosphere for sport training, leisure activities, recreation and even large festive events.

The ETH campus on the Hönggerberg in Zurich has gradually completed its expansion to its current dimensions. The complex was dominated early on by the six-storey physics auditorium designed by municipal architect Albert Heinrich Steiner. Today, it forms the boundaries of the sloping, centrally located longitudinal plaza on the east side of the complex. Past the south side, runners and walkers can enter the recreational area surrounding the forested mountaintop of Käferberg, while faculty members, who seek balancing physical exercise, gain access to sport facilities.

The urban-planning concept for the new ETH Sport Center pays homage to the site, along the transition from the campus development to the open recreational area. The flat structure forms the edge of a slightly depressed area and has been inserted deeply into the smoothly sloping landscape, forming a natural progression between the surroundings and the green roof. Facing the campus, the structure boasts an expansive façade, featuring prominent, slanted edges on top and the sides. Thus, the edifice seems lower and adapts diffidently to its environs. It respects the quality of the site and expresses the specific functions of the building.

The flat construction with its greenish crystalline façade has been outfitted with a triple sports hall, featuring an auditorium and changing rooms, other facilities include dance halls and gymnasiums, a gym and a wellness area. The architectural concept has placed the rather bulky cube structure of the triple sports hall deeply into the ground, thus smoothly aligning the upper edge of the ceiling and the adjacent grassland. The hall is flanked by multi-storeyed recreational facilities, adjoining rooms and other uses. The building edges are polyhedral, respecting site conditions and preventing the oversized construction from dominating the locale.

A partially opaque, and partially transparent façade crafted from green insulating glass evokes the impression of an irregularly cut crystal. The balanced interplay of its impactful setting and the building’s dialogical edges becomes manifest at the entrance and the adjacent foyer: Precisely following movement the entrée opens at the front of the flat angled west façade, while receding at the same time to form a vestibule. The vestibule leads to an ample glazed foyer adjacent to the main hall that pierces through the complex and terminates in a green, sloping area forming the transition to the open grassland. The structure merges urban-planning and architectural elements. Exterior movement is absorbed, separated and directed toward various functions, while on the other hand it is channelled into green space. Another northern green ramp connects the building again to the surrounding landscape.

The ceiling above the hall extends through the auditorium and the foyer. It merges a topography of varying heights and uses under its roof: a development of large dimensions that aside from sport premises facilitates festive occasions. In addition to such expansive space configurations the gym, cardio and wellness area in the south side of the building are vertically oriented to the space and on top enclosed by a slanted roof. Its exterior, interior and zoning form a contrast of corresponding and superimposing elements, which according to individual interpretation offer stimulation, surprise and architectural indulgence. 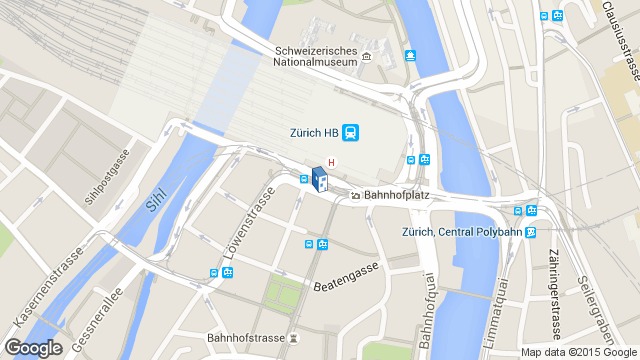