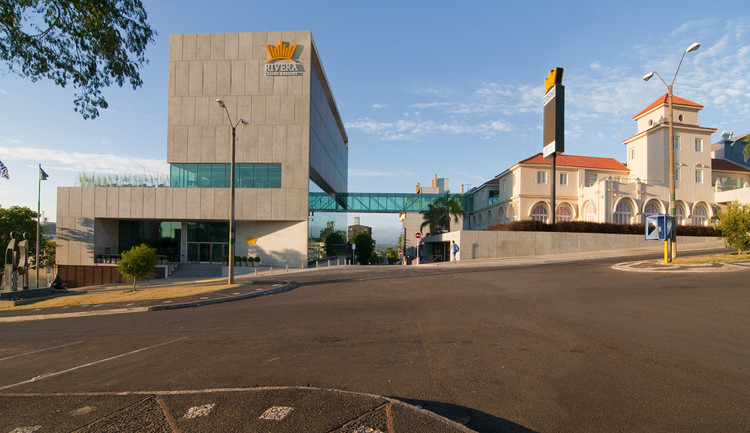 Text description provided by the architects. The site

The city of Rivera, 500km north of Montevideo, is located at the junction of the CuchillaNegra and the Cuchilla de Santa Ana. It conurbates with the Brazilian city of Santana do Livramento while sharing a land border: only a street and a square, Plaza Internacional, separate the two. In this city, the social integration between two countries that share no territorial limits is the prevailing aspect, as people are able to cross freely from one city to the other.

The project of the new Rivera Hotel and Casino complex proposes a three-tiered intervention:

1 / To reactivate the old building of the casino

3 / To build a new four-star Hotel in the site located across Uruguay street.

The building complex attempts to configure a new pole in the city of Rivera through an Entertainment Center, by repurposing the old casino and Municipal Theater.

In geographical terms, the site is located exactly over the borderline between Uruguay and Brazil, a strategic location in terms of both tourist and commercial appeal. In addition, standing at the height of Treinta y TresOrientales Avenue, next to Cerro del Marco, the building gains visibility from a distance. Regarding the intervention on the building of the old casino - a well-crafted, early XXth-century building - the project proposes to protect and restore its value, to take hold of its “urban history”.

It is then that the building acquires new meaning and articulates with the Hotel, the latter much more contemporary in nature. The project alters its base, generating a new access platform. This resolves the two entrances to the Casino: the one on Uruguay Street gives access to the tables of the gaming hall. The other, on Treinta y TresOrientales Avenue, marks the old entrance under a large eave and constitutes the double access to the Casino and the Teatro Municipal, which refreshes its facade in order to articulate with the new complex, giving unity to the composition.

The building connects to the Hotel through a bridge which links the level of the VIP rooms (located on the last storey of the Casino building), with the level of the Duty Free Shop and Breakfast lounge/Pool, a connection which is light and transparent - a bond between two distinct types of architecture belonging to different times. From the Hotel we descend to the Casino through a system of escalators which lands us at the different stages of the old building.

The type of architecture of the Hotel building deals in contemporary codes which are more in tune with current hospitality trends. It is thus that the formal proposition generates two distinct points of view. One is linked to a far-off perspective, represented by the high-rise block containing the rooms in the longitudinal east-west direction, generating a long facade with great visibility. The other, a low insertion occupying the entire site, houses the remaining aspects of the program: lobby, convention center, restaurants, pool, etc. The low-rise block is transparent, allowing the building to “open up” to the exterior, making public its less private spaces.

The materials used throughout the project invite to two different interpretations: one which is harder while the other is lighter, softer, more permeable. On the one hand, the use of on-site pre-cast concrete and exposed concrete, as the material which structures the opacities and definitions of tectonic borders, of tense edges which give access to the different levels of both the hotel and the casino. On the other, lighter limits such as those provided by the use of glass and metal gratings, connect with the act of opening up and relating to the outside.

It was interesting to work on the different scales the building proposes; both the sun-shade system as well as the main curtain-wall (where the lobby/hotel restaurant are located), offer a homogeneous surface when looked upon from a distance, attempting to give scale to the entire facade and generating planes of material continuity.

Therefore, glass takes the form - from ground level up to the railing on the third level - of a single piece separated from the other plane of sun-shading by means of a dislocation of the facade which forms a joint at the scale of the facade. Two planes, one brown and metallic, another green and reflective.

Towards the side of the Casino, the exposed concrete gives way to the infiltrations of that new architecture which takes over the entrances and the extension of the service area facing Uruguay Street. All in all, the project proposes a change in scale for the studio, at every scale. 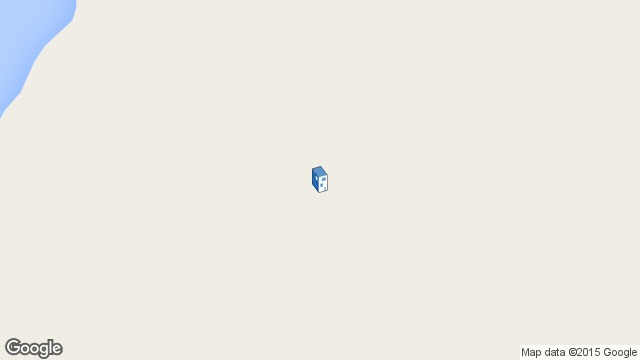