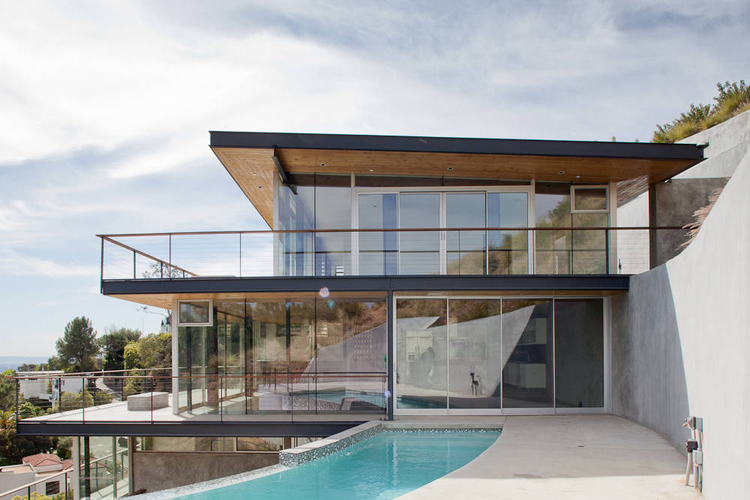 Text description provided by the architects. This private residence is located in the Hollywood Hills, overlooking the City of Los Angeles. It is one of the rare remaining building lots of this neighborhood, also one of the few protected areas in the City. The building engages with the surrounding environment in order to produce an Architecture that merges with the Landscape. The contemporary design of the house interacts as well with the natural elements (air, sun and vegetation) but has only a little visual impact in the Hills.

The site has a very steep topography but mostly constituted of Bedrock. The North-South orientation offers a panoramic view of the LA basin while being naturally protected from the sun in the warm afternoons. The building casts itself into the site on four levels to create enough living area to accommodate the program but also to reinforce the climatic orientations of the design. Half of the living volume is located underground.

The foundations and retaining walls are made of concrete, which become the primary material of the house. It also creates a thermal mass for the building that in connection with the orientation of the house and its natural ventilation avoids the use of air conditioning. Water circulating through the metal sunscreens is naturally heated and redirected to the radiant floor system.

The building’s skin that opens itself on the exterior is made of insulated glass reflecting the surrounding vegetation. As a result the house disappears into its environment, still managing to open itself to it. The outdoor decks (terraces, swimming pool, patio) are equal in surface to the indoor and allow through the local climate to live outside for most of the year.