Save
AD Round Up: OMA Part I
Share
Or
Copy

Rem Koolhas founded the Office for Metropolitan Architecture in 1975 together with Elia and Zoe Zenghelis and Madelon Vriesendorp. Winners of the Pritzker Prize in 2000, OMA employs a staff of almost 300 of more than 35 nationalities. So for today’s Round Up, we bring you previously featured projects by OMA.

Bryghusgrunden mixed use, Copenhagen Realdania is a strategic foundation that initiates and supports built projects that improve the quality of life in Denmark. They are involved in aprox. 54 flagship projects, and now they are starting a mixed use building in Bryghusgrunden, one of the few undeveloped remaining areas of Copenhagen, Denmark with the potential to link the city to the waterfront. And guess who they choose for this project: OMA. But what´s interesting in this project is the mixed of use (read more…)

Coolsingel mixed use building and construction at The Hague There’s nothing more exciting for an architect than to shape the form of his own city with a new building. And that’s what Rem Koolhaas is about to do in Rotterdam with a large scale mixed use building. Also, a project developed for The Hague, also in the Netherlands, will start construction as of next year. Site visits will be closer to the central OMA headquarters this time. First, we’ve got a 120.000m2 (30.000m2 for retail, 70.000m2 for office, residential, culture and leisure) (read more…)

OMA unveils design for their first residential tower in NY Located at at 23 East 22nd St, the 335 ft (107 m) tall mid-rise tower -which you can see on the second plane behind One Madison Park at the rendering- features an innovative design when it comes to towers, an evolution of the OMA studies on new high rise designs. The building cantilevers 30 feet over its neighbor, a form that “provides a number of unexpected moments that appear at each step – balconies at the upper part of the building and floor windows at the lower part (read more…) 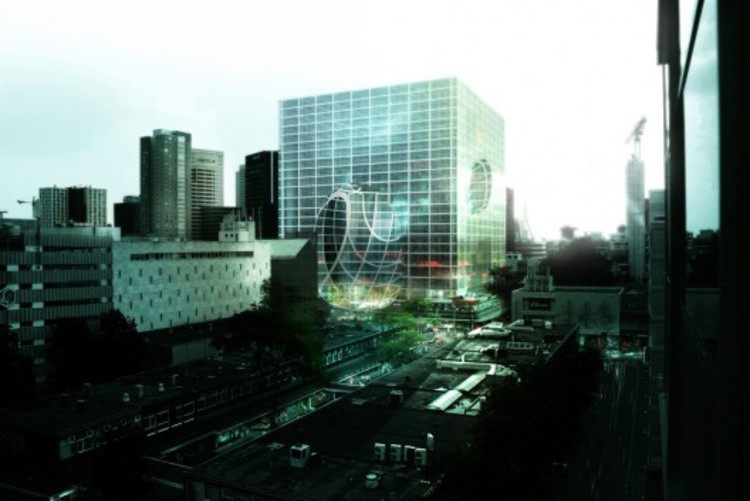 OMA wins competition for the Taipei Performing Arts Centre The project, led by Rem Koolhaas and Ole Scheeren, is based on 3 theaters (1 x 1,500 seats – the round one, 2 x 800 seats – cubes) which are plugged into a central cube cladded with corrugated glass. This scheme puts all the stage accommodations of the 3 theaters into the central cube, allowing for more flexibility as theaters can be used independently or combined, expanding the possibilities for experimental performances – an art which is very strong on the country (read more…)

Seattle Central Library (with LMN) The Seattle Central Library redefines the library as an institution no longer exclusively dedicated to the book, but as an information store where all potent forms of media-new and old-are presented equally and legibly. In an age where information can be accessed anywhere, it is the simultaneity of all media and, more importantly, the curatorship of their content that will make the library vital. Flexibility in contemporary libraries is conceived as the creation of generic floors (read more…)