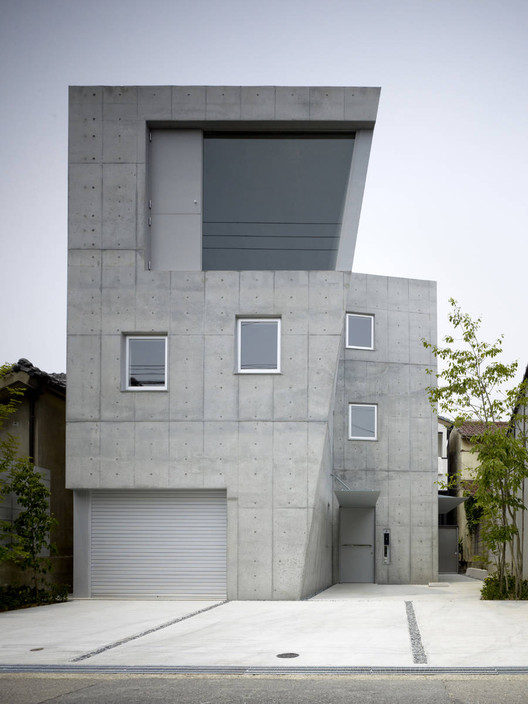 Text description provided by the architects. This building is a private house with an attached office, directly northwest of Himeji castle. The site’s depth is longer than its width. There is also a building adjacent to this house which obscures Himeji castle at ground level. One thing to note is that even though there are modern buildings in this city, this private residence is surrounded by a traditional “castle town”, with many historical buildings, houses, and monuments.

We were petitioned by the client to design a living space with the following three requests:
1. To be able to see Himeji castle from the living room,
2. To be able to park five cars, with three of those stalls as the guest parking space and,
3. To incorporate a garden where laundry can be hung out to dry and to allow their dogs to run about freely.
Therefore, the theme of this project was to respond to the client's requests while mediating the differences between the historical buildings and the new residence.

The solution to the theme was created by using the shape of a twisted rectangular structure and was designed with the following steps:
1. The building was designed at a distance from the street to make the necessary parking space.
2. A rectangular structure was basically cut in half, with each half shifted in opposite directions to make a “staggered” form, which allows enough space for the private garden.
3. The walls of the staggered structure were then slightly twisted and lifted in order to incorporate a view of Himeji castle.

In architectural terms, this process creates a building structure with four hyperbolic parabolic walls (refer to concept model). As the walls increase in height, the overall area and volume of each floor increases as well, giving the house a more spacious atmosphere.In addition, when compared to a tall, large building that is adjacent to low-rise historical structures, the Himeji Observatory House adapts much better to its surroundings because the twisted, staggered shape reduces any extraneous volume that would otherwise impede on the overall appearance of the neighborhood.

Furthermore, as the building ages and the concrete walls start to weather, the Himeji Observatory House will develop more character - the trees will grow taller, the exterior walls will become weather-stained, and the entire property will slowly harmonize with the rest of the neighbourhood.

The modest appearance that comes with age will be similar to the moss-covered stone walls of Himeji castle. I designed this house as if it were coming to life, stretching its toes in order to see Himeji castle over the canopy of the trees. I hope that the house will reflect the client's attachment to Himeji castle, while also being accepted by the historical town.